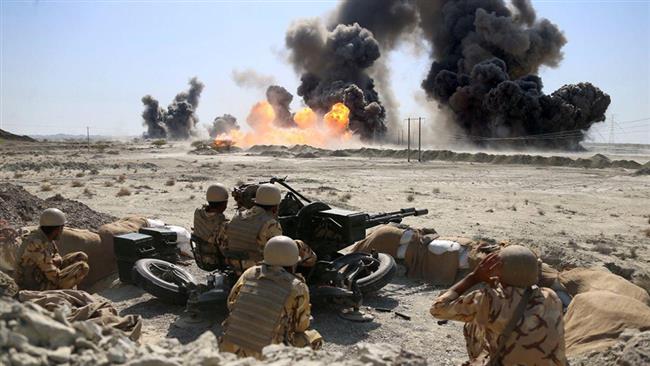 They cover an expanse of 2.2 million square kilometers in Iran’s south and southeast, the Makran Coast, and other areas in the Gulf of Oman.

Rear Admiral Seyyed Mahmoud Mousavi, the spokesperson for the maneuvers, told Press TV that the second day of the drills would see Iranian vessels conduct surface, anti-surface and anti-aircraft operations at the Sea of Oman.

The forces attending the maneuvers will also employ radar and surveillance systems to detect ground and aerial activities by the mock enemy. They will then use missiles and artillery fire to eliminate those threats.

During the exercises, short-range Nasr rockets along with medium- and long-range surface-to-surface missiles would be used to strike enemy targets, Mousavi pointed out.

The Army's Deputy Commander for Coordination, Habibollah Sayyari, said on Monday that the maneuvers were aimed at improving defense capabilities, enhancing the preparedness and morale of the servicemen, and evaluating training tactics, fire power and coordination among forces.

The first day of the drills featured the use of various precision-strike rockets and laser-guided artillery. Heavy and light submarines as well as helicopters were also deployed during in the exercises.

Additionally on Monday, the Iranian Army warned off two US-led coalition battleships that had approached the site of the drills for surveillance.