TEHRAN, January 23 - Catalan separatist leader Carles Puigdemont said on Tuesday his return from self-exile to Barcelona would be good for Spanish democracy, but he stopped short of saying he would go home. 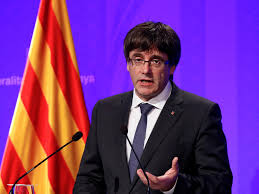 TEHRAN, Young Journalists Club (YJC) - Puigdemont told a news conference in Copenhagen that a "huge majority" of the Catalan parliament supported naming him as regional president following an election in December in which separatist parties won a majority.

"I am elected president...and there is a huge majority in our parliament also to nominate me as a president so that is part of the solution," Puigdemont said during a visit to Copenhagen.

Asked whether he would return to Spain, said: "My return in Barcelona will be not only good news for Catalan people who support our cause but also for Spanish people and Spanish democracy."

But he did not say if and when he would back to Spain.

On Monday, the Catalan parliament nominated Puigdemont as its candidate to rule the region. He had been dismissed as president by the Madrid government in October after organizing an illegal referendum and declaring independence. He fled to Belgium as the government laid sedition and rebellion charges against him and took direct control of the region.

"I invite all the parties of this country to make the efforts in the way that could show positive results," Puigdemont said.