US calls on Turkey to exercise restraint in Syria offensive

TEHRAN, January 23 - US Defense Secretary Jim Mattis has called on Turkey to exercise restraint in its military campaign against Kurdish forces in northwest Syria. 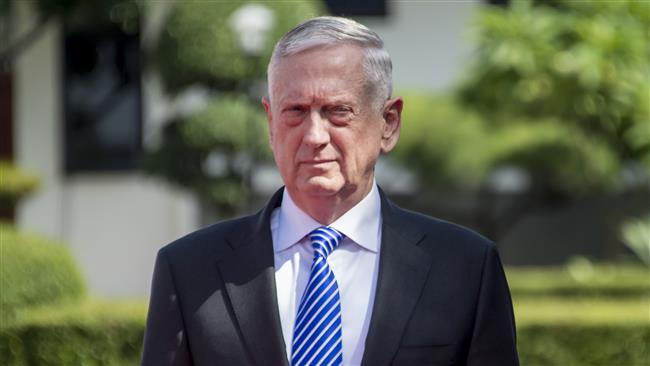 TEHRAN, Young Journalists Club (YJC) - "We take very seriously Turkey's legitimate security concerns and we are committed to work with our NATO allies on those," Mattis said in Jakarta on Tuesday at the start of an Asian tour.

"We urge Turkey to exercise restraint in the military action and the rhetoric."

"The violence in Afrin disrupts what was a relatively stable area in Syria and distracts from the international effort to defeat ISIS," Mattis added.

Turkey launched the so-called Operation Olive Branch on Saturday in a bid to eliminate the US-backed YPG, which Ankara views as a terror organization and the Syrian branch of the outlawed Kurdish Workers’ Party (PKK). The latter has been fighting for an autonomous region inside Turkey since 1984.

According to the Syrian Observatory for Human Rights, 22 civilians have been killed in Turkish shelling and airstrikes, and thousands have fled from the clashes.

Harsh weather conditions have disrupted air support for the operation over the past day, limiting Turkey’s advances and enabling Kurdish fighters to retake some territory.

Turkey has also been assisting the so-called Free Syrian Army militants to fight against the Kurdish fighters.

The YPG is operating under the banner of the larger US-backed Syrian Democratic Forces (SDF) without authorization from Damascus, which calls the force “traitors” to the Syrian nation.

The operation was launched days after Washington said it would work with the Kurdish militants to set up a 30,000-strong border force near Turkish soil, a move that infuriated Ankara.

Turkish President Recep Tayyip Erdogan says Ankara seeks to eliminate YPG control not just in the Afrin region but also in the mainly Arab town of Manbij to the east.

Both the US and Russia have military presence in Syria. Russia has also urged Turkey to show restraint in its so-called Operation Olive Branch.

Avoiding clashes with US, Russia

On Tuesday, Turkish Foreign Minister Mevlut Cavusoglu said Turkey seeks to avoid any confrontation with US, Russian or Syrian forces, but stressed that it will adopt any measures required for its security.

"Terrorists in Manbij are constantly firing provocation shots. If the United States doesn't stop this, we will stop it," Turkish broadcaster Haberturk quoted him as saying.

"Our goal is not to clash with Russians, the Syrian regime or the United States, it is to battle the terrorist organization."

"I must take whatever step I have to. If not, our future as a country is in jeopardy tomorrow. We are not afraid of anyone on this, we are determined... We will not live with fear and threats," Cavusoglu said.

Share to
Related News
Turkish foreign minister's US visit postponed
Over 100 missiles fired from Russian warships during Syrian operation - Navy
Erdogan: Turkey will clean its entire border with Syria from terrorists
Kurdish forces pull down US flag in northern Raqqa
Iran strongly defends Syria’s territorial integrity – Boroujerdi
US troops must leave Syria’s Manbij – Turkey’s Foreign Minister
Iran advises Europe not to move ahead with the “US already-defeated plan”
Erdogan: Syria offensive could expand as far as Iraq border
Kennedyto give Democratic response to Trump's State of the Union address
Any presence in Syria has to be in coordination with its legitimate government – Brig. Gen. Vahidi
Trump urges Erdogan not to ‘risk conflict’ with US forces in Syria
Turkey is an aggressive neighbor, Greek PM tells Europeans in Davos
Russia deploys four S-400 missile defense systems to Syria
Turkey detains 24 over social media comments on Syria, capital bans protests
Turkey was 'candid' as it 'warned' US before attacking Kurds in Syria
Russia: US arms deliveries to Syria militants prompted Turkey's offensive
Footage shows Turkish airstrike in Syria's Afrin
Tags
US ، Turkey ، Syria
Your Comment