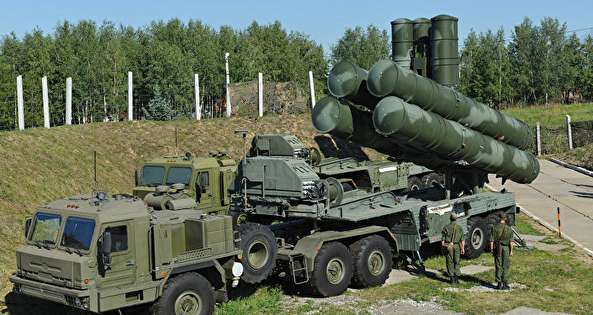 In the videos published by the Russian Defense Ministry on Tuesday, two of the four units can be seen being delivered to the Hmeimim airbase in Syria's coastal province of Latakia.

The two other units were shipped to the Russian maritime facility located in Syria's Mediterranean coastal city of Tartus.

The S-400 is Russia's latest operational anti-aircraft weapons system and is designed to target airborne targets including ballistic missiles. It is capable of simultaneously engaging up to 36 targets.

Hmeimim serves as Russia’s permanent airbase inside Syria and is adjacent to the Bassel al-Assad International Airport, with which it shares some airfield facilities.

In 2016, Damascus and Moscow signed a treaty to lease the base to Russian military forces for 49 years, extendable for an additional 25 years.

Since September 2015, Russia has been conducting aerial attacks against terrorist positions in Syria at a request from the Damascus government.

Share to
Related News
Russia completes delivery of first regimental set of S-400 to China
US troops must leave Syria’s Manbij – Turkey’s Foreign Minister
Iran advises Europe not to move ahead with the “US already-defeated plan”
US stalls destruction of own vast chemical arsenal, seeks to sidetrack UNSC & CWC – Moscow
Qatar holding talks with Russia to buy S-400 air defense systems: Diplomat
Any presence in Syria has to be in coordination with its legitimate government – Brig. Gen. Vahidi
US calls on Turkey to exercise restraint in Syria offensive
Turkey detains 24 over social media comments on Syria, capital bans protests
Turkey was 'candid' as it 'warned' US before attacking Kurds in Syria
Russia: US arms deliveries to Syria militants prompted Turkey's offensive
Tags
Russia ، Syria ، missile defense systems
Your Comment