TEHRAN, January 24 - Thousands of people demonstrated on Tuesday in different cities of Switzerland against the presence of US President Donald Trump in the World Economic Forum (WEF) held in the Alpine town of Davos. 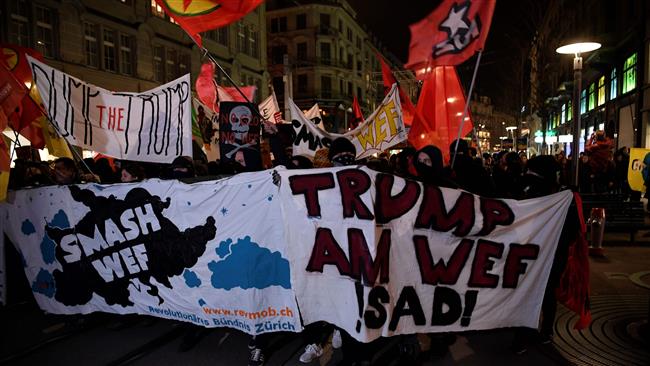 TEHRAN, Young Journalists Club (YJC) - Police estimated that around 2,000 protesters in Zurich, organized by the left-wing movement, protested in in the city.

Also 20 protesters were arrested. They were breaking through the security fence around Davos Congress Center to reach it as Police arrested them, Reuters reported.

They were carrying placards shouting “Wipe out WEF” before being scattered ed by police officers.

Hundreds of protesters also demonstrated in the main squares Geneva, Lausanne and Freiburg.

More than 4,000 troops and about a dozen Swiss police officers are assigned to secure the Davos Summit. The area was also announced as no-fly zone.

Protest organizers called for the rallies on Tuesday under the mottos of “Trump Not Welcome” and “Smash WEF!” coinciding with the start of the annual meeting of global business and political leaders in Davos, where Trump is due to address the forum on Friday.

Hundreds of protesters had taken to the streets of the Swiss capital of Bern earlier this month to protest Trump’s planned appearance at the WEF. He is the first sitting US president to attend the gathering in 18 years.