‘US seeks fueling tensions in centers of dispute in West Asia’ 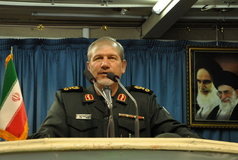 TEHRAN, Young Journalists Club (YJC) - He said Iran is trying to make a coalition against the US coalition in a sagacious way, and stressed formation of a coalition with Pakistan and Iraq to confront chaos and terrorism.

The US strategy in the new Christian year is based on maintaining tension in centers of disputes and weaken them for political and economic advantages, he said, adding, “The US has broken all international laws.”

The Iranian official said that Washington wants to fuel tension in West Asia to pursue its political, economic and military goals.

He said that the US coalition is after creating tension, therefore formation of a regional coalition can prevent this tension. “The US seeks a big strategic competition with Russia, China and even India.”

He said Iran is a serious rival for the US in preserving peace and security in the region.