Japan chief, credited with helping steer recovery, to step down

TEHRAN, January 24 -Japan Airlines Co (9201.T) (JAL) said President Yoshiharu Ueki, who helped lead the company’s recovery from bankruptcy, will be replaced by a senior executive in April, as the carrier looks to profitably win back some of its market share at home. 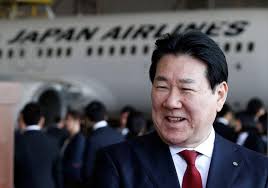 TEHRAN, Young Journalists Club (YJC) -Japan Airlines Co (9201.T) (JAL) said President Yoshiharu Ueki, who helped lead the company’s recovery from bankruptcy, will be replaced by a senior executive in April, as the carrier looks to profitably win back some of its market share at home.

Ueki, a former pilot who was named president in 2012, will become chairman while 56-year-old Yuji Akasaka, currently managing executive officer in charge of engineering and maintenance, will become the new president, the company said.

Ueki said he had set a six-year presidential term as a goal.

“I wanted to pass the baton to the next generation before my energy became empty, and that came this year,” the 65-year-old said at a news conference on Wednesday.

Ueki is credited with being instrumental in revitalizing the once-bankrupt carrier by slashing costs and clinching code-sharing deals. The challenge for his successor will be to gain back market share from rival ANA Holdings (9202.T).

“I want to continue developing our business with the intent of securing solid profitability, and not aimlessly pursue scale,” Akasaka said at the news conference.

JAL was freed from government-imposed restrictions on route expansion only last April, more than seven years after filing for bankruptcy and receiving a taxpayer-funded bailout.

“The management change seems a year late - not at all relating to competency but rather because a new strategy should be led by a new team,” said Will Horton, a senior analyst at CAPA Centre for Aviation.

“The biggest challenge for the new management team is to change company mindset, retaining financial discipline and strong service focus but being less unnecessarily conservative and more agile.”

In 2010, JAL had collapsed under the weight of a bloated cost base and over 2 trillion yen ($18 billion) in debt. With the help of a 350-billion yen capital injection from a state-backed fund, and debt waivers by banks, the former flag carrier relisted in Tokyo less than three years later.

ANA benefited from JAL’s bankruptcy by winning slots at Haneda Airport, the airport preferred by business travelers departing from or arriving in Tokyo. It overtook JAL in 2016 to become the country’s biggest international airline and holds a higher Skytrax rating for passenger service and comfort.