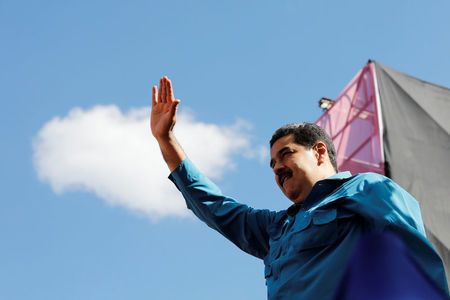 "Donald Trump is not the boss of Venezuela!" thundered Maduro at a rally late on Tuesday. He spoke hours after the pro-government Constituent Assembly, a legislative superbody, announced the vote would be held by April 30.

Maduro's candidacy seems a formality: he says he will stand if the Socialist Party wants him, and party leaders say there is no other candidate under consideration.

The president's approval ratings have plunged during a crushing four-year recession caused by failed state economic policies such as decade-old currency controls, and the fall in global oil prices since 2014.

The U.S. State Department weighed in on Wednesday, criticizing the decision to hold an election, saying the vote would deepen the country's internal tensions.

Foreign sanctions against Maduro's government, including a U.S. prohibition on investors dealing with any new Venezuelan debt, have exacerbated the grim panorama as millions suffer food and medicine shortages and the world's highest inflation.

But having survived massive protests last year and consolidated his grip, the international pressure has now given Maduro a powerful rallying cry to seek re-election.

"The people rule in Venezuela, not empires," he said at Tuesday's rally, going straight into campaign mode with jingles from past elections. "I'm ready ... We're going to win big."

Venezuela's opposition, which brought hundreds of thousands of people onto the streets last year in an attempt to oust Maduro, is in a quandary.