Any presence in Syria has to be in coordination with its legitimate government – Brig. Gen. Vahidi

TEHRAN, January 25 - Calling the US presence in Syria “unlawful”, the president of Iran’s Supreme National Defense University said any presence in Syria has to be in coordination with its legitimate government. 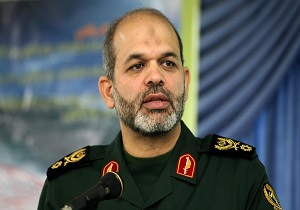 TEHRAN, Young Journalists Club (YJC) - Responding to reporters’ question about whether there is any evidence concerning the US interferences in Syria, Brigadier General Ahmad Vahidi, the president of Iran’s Supreme National Defense University, said “the unwarranted interference of the US in Syria is in violation of all international laws. These are acts of aggression in a country from which the US has never received a permission, nor an invitation.”

Suggesting that no international resolution has certified the US presence in the northern Syria, the president of Supreme National Defense University added: “this is a clear act of aggression from the US. The Syrian side has to condemn the US administration’s efforts in dividing some parts of Syria and constructing numerous military bases in the country.”
Addressing the US authorities, he said “in light of the recent acts of the US, Washington has to prepare for any potential danger; since their presence (in Syria) is unlawful, and Syrian people and gorvernment have the right to defend themselves against this illegal presence.”

Vahdi, addressing the Kurdish population in Syria, said “we remind the great Kurdish people that the US has always been an enemy of Islamic nations. Syrian Kurds, who are themselves muslims, should not allow Washington to use them as scapegoats.”

“The government in Syria, which has a representative in the United Nations, is legitimate. A govenment which has defeated terrorist groups such as Daesh is regarded as legitimate by international laws. Thus, any presence in Syria has to be in coordination with the country’s legitimate gorvernment”, he concluded.