TEHRAN, January 25 - Chairman for the Committee for Foreign Policy and National Security in the Iranian Parliament commented on Tehran’s missile capabilities during a meeting with Chair of the European Parliament Foreign Affairs Commitee in Brussells. 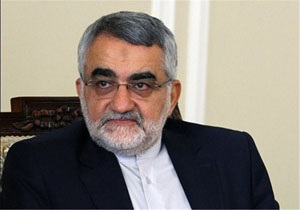 TEHRAN, Young Journalists Club (YJC) - Alaeddin Boroujerdi, Chairman for the Committee for Foreign Policy and National Security of the Islamic Consultative Assembly of Iran, and David McAllister, Chair of the European Parliament Foreign Affairs Commitee met and discussed the latest developments in Western Asia and ways to expand cooperation and exchange views with the European Parliament in Brussels.

Boroujerdi said in this meeting that the Islamic Republic of Iran values promoting cooperations with European states in a framework of mutual benefits and interests, and is ready to take considerable steps to this end.
“It is the time that Europe made decisions in line with its interests and independently of the US. EU’s frequent oppositions against the obstructive policies adopted by the US is a clear indication of the change”, Chairman of National Security and Foreign Policy Committee said in this meeting.
Boroujerdi added: “the Islamic Republic of Iran is a fierce opponent of weapons of mass destruction, especially nuclear weapons. Thus, the only way to realize the policy of deterrence is acquisition of missile capabilities, which will not be open to negotiations with any other country”.

David McAllister said in this meeting: “We see cooperations with Iran, of considerable importance. I will make a trip to Iran in the near future.”

“Such meetings will prove productive in terms of establishing common understandings and strengthening the common points in our bilateral cooperation, including human rights”, he further added.