TEHRAN, January 25 - At least 2 people were killed and dozens were injured after a commuter train derailed outside Milan, Italy, local media reports. 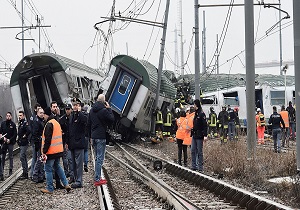 TEHRAN, Young Journalists Club (YJC) - The commuter train, which was transporting people to Milan’s Porta Garibaldi neighborhood, derailed on Wednesday at around 7am local time between the stations of Treviglio and Seggiano di Pioltello, RAI reports. The authorities have confirmed that passengers were killed and dozens were injured.

Several people are still stuck inside the wreckage, and firefighters say there could be more.

La Repubblica newspaper reports a heavy presence of ambulances at the crash site, while a hospital in the nearby city of Monza has suspended all surgical operations as they await the arrival of a potentially large number of injured commuters.

Trenord, the railway company operating the commuter trains, says it has stopped its service on the track between Milan and Treviglio.

Witnesses say the train was full of passengers before the accident. A 25-year-old commuter named Gianmarco told La Repubblica: “Just before Pioltello, the train began to shake and we realized that something was about to happen.” This was followed by a bang, and it derailed, he said.