TEHRAN, January 25 - David Cameron has been caught telling a steel tycoon that Brexit is not the “disaster” he expected. Unaware he was being filmed, the ex-PM also said that leaving the EU had “turned out less badly than we first thought.” 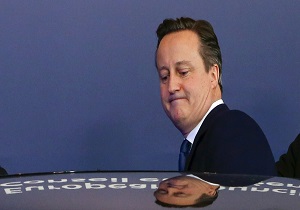 TEHRAN, Young Journalists Club (YJC) - The off-guard comments were captured on camera at the World Economic Forum in Davos, Switzerland. In the footage, Cameron appears engrossed in conversation with Indian-British steel magnate Lakshmi Mittal, estimated to be the fourth-richest person in the UK.

In footage highlighted by Five News, Mittal observed that Brexit was the topic of the moment, and Cameron responded: "[Brexit] is frustrating. As I keep saying, it's a mistake not a disaster. It's turned out less badly than we first thought,” the former PM said. “But it's still going to be difficult."

Cameron also told Mittal that in his post-political career he was keeping "busy" leading a billion-pound investment initiative agreed between the UK and China, as well as writing a book.

The ex-Tory leader’s tune has certainly changed. In the lead up to the 2016 referendum, he championed an anti-Brexit campaign that was dubbed “Project Fear” by the pro-Brexit tabloids.

The former Conservative leader is now being openly mocked on social media for his changed stance.

Cameron resigned as prime minister on the morning after the Brexit vote in June 2016. At the time, he said it would not be right for him to "be the captain that steers our country to its next destination".