Malala Yousafzai says men like Trump should 'think about their daughters, mothers' when considering how to treat women

TEHRAN, January 25 - Nobel laureate Malala Yousafzai has said men like US President Donald Donald Trump should “think about their daughters and mothers” when considering how to treat women. 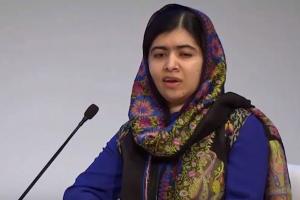 TEHRAN, Young Journalists Club (YJC) - The 20-year-old human rights activist appeared at the World Economic Forum in Davos, where she addressed the issue of the issues of women’s and girls’ rights.

Asked whether she had a message for men who were “like” the US President, Yousafzai said: “I just get so disappointed to see that people are at these high positions — they talk against women, they do not accept women as equal, and they harass women.”

She said such behavior was “shocking” and she hoped women “stand up and speak out against it”.

“And I hope that people who are involved in such shameful things think about their own daughters, their own mothers and their own close female relatives.

“Just imagine for a second ... can they let it happen to their daughters, to their sisters, to their mothers? I don’t think that they would accept that.”

The US President has been publicly accused of making unwanted sexual advances to 20 women.

The President’s spokeswoman Sarah Sanders has said all his accusers were lying.

Trump has also come under fire for comparing females to pigs and dogs and for saying women who have abortions should be “punished”.