TEHRAN, January 25 - A mummy whose corpse was ravaged by syphilis and buried in a Swiss mountain village has been identified by scientists as a distant ancestor of British Foreign Secretary Boris Johnson. 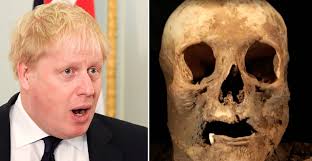 TEHRAN, Young Journalists Club (YJC) - The preserved body, which was unearthed decades ago in Basel, Switzerland, has been given a definitive identity for the first time after extensive research. And the results place her on the same family tree as Johnson.

According to SRF, a Swiss TV channel which has produced a documentary on the mummy, she is Anna Catharina Bischoff, an 18th-century clergyman's wife. She was discovered under Basel's Barfüsser Church in the 1970s during renovations.

A few hours after the story broke in the UK, Johnson said he was "excited" and "very proud" to learn of his link to Bischoff.

Bischoff is referred to as a mummy, but she had an ordinary Christian burial, and her body wasn't kept intact on purpose.

Rather, according to the BBC, her body was preserved by accident thanks to the large quantities of mercury she ingested.

At the time she was alive, doctors believed mercury could help treat syphilis, but it was much more likely to have hastened her death.