Trump says US to withhold aid to Palestinians

TEHRAN, January 25 - US President Donald Trump has threatened to withhold hundreds of millions of dollars of aid from Palestinians if they refuse to participate in US-brokered “peace talks” with Israel. 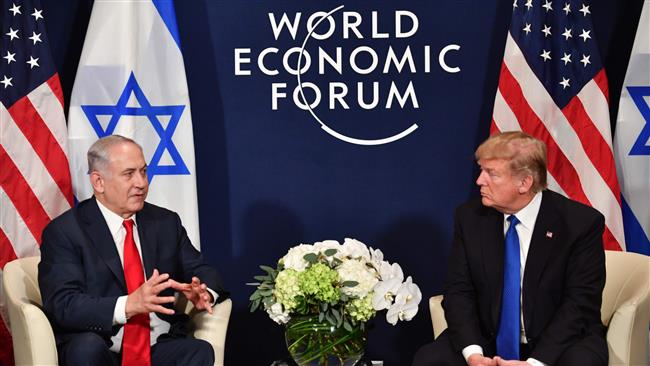 TEHRAN, Young Journalists Club (YJC) - Speaking on Thursday at the World Economic Forum at Davos, Switzerland, Trump told reporters that Palestinians had “disrespected” Vice-President Mike Pence on his visit to the region.

"They disrespected us a week ago by not allowing our great vice president to see them," Trump said during a meeting with Israeli Prime Minister Benjamin Netanyahu.

"We give them hundreds of millions," Trump added. "That money is not going to them unless they sit down and negotiate peace."

Palestinians were infuriated by Trump's decision last month to recognize Jerusalem al-Quds as Israel's capital and relocate the US embassy in Israel from Tel Aviv to the holy city.

Palestinians are hopeful that the eastern part of the city would eventually serve as the capital of a future independent state.

Trump's al-Quds shift was a break from decades of US policy that left the occupied city’s status to be decided in Israeli-Palestinian negotiations.

During the meeting with Netanyahu in Davos, Trump tried to convince a deeply skeptical Muslim world that he could still be an honest broker.

"We have a proposal for peace. It is a great proposal for the Palestinians," Trump claimed, adding that Israel would also be forced to make concessions.

The Palestinians rejected Trump's latest threat, with a senior official labeling him an "oppressor."

A spokesman for Palestinian President Mahmoud Abbas said they would not meet with American officials until Washington withdrew its recognition of al-Quds as Israel's capital.

"If the American administration will not go back on their decision to recognize Jerusalem as the capital of Israel, it will remain outside the (negotiation) table," Nabil Abu Rudeina said.

Earlier this month, the US reneged on a pledge to contribute $45 million to a United Nations agency tasked with providing services for Palestinian refugees, adding to cutbacks announced earlier this week.

The US State Department said last Thursday that the $45 million was a pledge to the UN Relief and Works Agency (UNRWA) to help it with “forecasting,” but it was not a guarantee.

The State Department had earlier said the US would withhold a separate $65 million it had planned to pay UNRWA, saying the agency needed to make unspecified reforms.

In a tweet on January 2, Trump said Washington gives the Palestinians hundreds of millions of dollars a year, “but get no appreciation or respect.”

Share to
Related News
Turkey will 'retaliate' if US halts weapon sales over purchase of Russian arms – Ankara
A decade after recession, a jump in U.S. states with wage gains
Negotiate or lose ‘hundreds of millions’ in aid, Trump tells ‘disrespectful’ Palestinians
Tags
US ، Donald Trump ، Palestine
Your Comment