TEHRAN, January 26 -In testimony before the Senate, national security strategists from the Nixon, Reagan and Bush administrations identified nuclear annihilation, climate change and emerging technologies as major challenges facing the US. 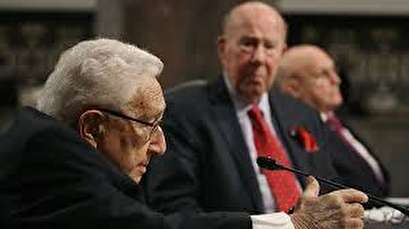 Former secretaries of state Henry Kissinger and George Shultz were joined at the Senate Armed Services Committee on Thursday by Deputy Secretary of State Richard Armitage. They all referred to the rising threat of nuclear annihilation through the erosion of international cohesion rather than consolidation.

“My immediate concern is if North Korea still possess a miliarity nuclear capability the impact on the proliferation of nuclear weapons might be fundamental, because if North Korea could maintain its capability in the face of opposition by China and the US and disapproval by the rest of the world, other countries will think this is the way for achieving international prominence and gain an upper hand in international disputes,” Kissinger told the committee.

He said the Iranian agreement paradoxically legitimized the emergence of Iran as a nuclear power and the North Korean situation was even more acute “because they are closer to developing weapons than Iran.”

“We need to make a distinction between measures that relieve the immediate situation but make the ultimate situation even more severe,” Kissinger proffered as a solution, “all the more so because the problem of Iran is just down the road.”

“In those days, people seemed to have an appreciation of what would be the result if a nuclear weapon were ever used,”Shultz told senators. “I fear people have lost that sense of dread. And now we see everything going in the other direction with nuclear proliferation. The more countries with nuclear weapons, the more likely one is going to go off somewhere.”

Shultz’s major concern was over unregulated fission material and how easy, once acquired, it was to make a weapon that “can blow up the world.”

Reagan’s former secretary of state stressed the importance of having a different relationship with Russia, since “after all, Russia and US have the most nuclear weapons to start something.”

To deal with proliferation, he said,“we need to put a stop sign in front of Russia and make them come to their senses, and then start working with them.”

For Deputy Secretary of State Richard Armitage, however, the threat of nuclear annihilation was not existential.

For Kissinger, current events in the Middle East represent a disintegration of the international system that has existed since the end of the Second World War.

“Every country is either a combatant or a theater of conflict,” Kissinger told the committee. He said the defeat of IS would lead to the question of ‘what happens next,’ and the concern about who will occupy the territories it once held.

“The Iranian and Russian forces will become dominant and we will see a belt emerging that goes from Tehran to Beirut,”said Kissinger, arguing that this “undermines the structure of the region and creates long-term challenges.”

In Kissinger’s view, the dominant element of world politics will be the great power relationships between the US, China and Russia. He said the major questions going forward will be the strategic relationship between these countries vis-a-vis the prospect of peace, and if their values are compatible enough to encourage an agreed-upon legitimacy.