TEHRAN, January 26 -Hezbollah has slammed the US government’s interference in Lebanon’s banking system, after an American delegation was sent to the Mediterranean country on a mission to probe the resistance movement’s finances. 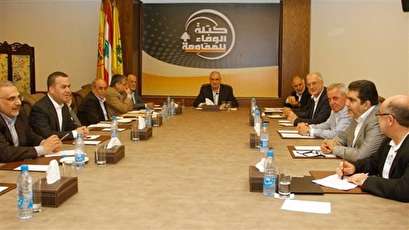 TEHRAN, Young Journalists Club (YJC) -Hezbollah has slammed the US government’s interference in Lebanon’s banking system, after an American delegation was sent to the Mediterranean country on a mission to probe the resistance movement’s finances.

“We condemn the work of the investigating American delegation in Lebanon and its interference in the Lebanese banking sector,” Member of Parliament Hasan Fadlallah said Thursday in a statement that Loyalty to Resistance parliamentary bloc issued after their meeting.

Hezbollah’s political wing also warned that the move by the US violates Lebanon’s sovereignty and provokes anti-Hezbollah sentiments.

In 2014, the US Congress passed the so-called Hezbollah International Financing Prevention Acts and amended it in 2017 in a bid to separate Lebanon’s banks and other financial infrastructure from the bloc.

Lebanese officials have been critical of the laws, arguing that Washington’s pressure on Beirut to go after Hezbollah could destabilize the entire country.

The laws introduce sanctions against Hezbollah Secretary General Sayyed Hassan Nasrallah and top commander Mustafa Badreddine as well as a number of businessmen. Lebanon’s al-Manar TV and al-Nour Radio are also on the list.

Loyalty to Resistance denounced the Lebanese banks’ commitment to the US laws.

“The decision to abide by the US law could make the monetary crisis in Lebanon worse as it could drive Lebanon towards bankruptcy because of the wide boycotts by the Lebanese and banks, something which will lead to monetary collapse and chaos,” the statement read.

The US Justice Department announced two weeks ago that it had formed a special task force of money-laundering, drug trafficking, terrorism and organized crime experts to investigate what it called “narco-terrorism” by Hezbollah.

Marshall Billingslea, the US Treasury Department’s Assistant Secretary for Terrorist Financing, headed to Lebanon this week to push forward plans by the administration of US President Donald Trump to cut off Hezbollah’s financial links.

Besides top banking and political figures, Billingslea also met with Lebanon’s President Michel Aoun and Prime Minister Saad al-Hariri during his visit, according to Reuters.

Billingslea told the Lebanese officials that Washington was going to help Lebanon “protect” it banking system from Hezbollah.

The US has been trying to portray Hezbollah as a criminal network after failing to label the resistance group as a terrorist organization.

Hezbollah is Lebanon’s de facto military power, and has been fighting off recurrent acts of Israeli aggression against the homeland.

The resistance group has also prevented the spillover of the Syria crisis into Lebanon by providing assistance to the neighboring country’s national army in its campaign against Takfiri terror groups, particularly Daesh and al-Nusra Front.