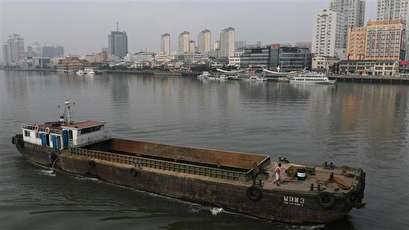 In an exclusive report on Thursday, Reuters cited three Western European intelligence sources as claiming that Pyongyang — which is banned by the United Nations Security Council from exporting coal — managed to send coal to two Russian ports last year.

Cargoes of coal were unloaded at the ports of Nakhodka and Kholmsk and then reloaded onto other ships, which took them to South Korea or Japan, the sources claimed.

The Council banned Pyongyang exports of coal last August as part of a new round of sanctions to cut off an important source of foreign currency for Pyongyang.

But, according to Reuters, Pyongyang has at least three times since then shipped coal to Russian ports. It did not clarify which companies profited from the alleged shipments.

It separately cited a Western shipping source as saying that some of the cargoes reached Japan and South Korea in October last year. A US security source also confirmed the coal trade via Russia and said it was continuing.

“Russia’s port of Nakhodka is becoming a transshipping hub for North Korean coal,” Reuters quoted one of the European security sources as alleging.

“This information is false,” Interfax quoted an embassy official as saying. “Russia does not buy coal from North Korea and is not a transit point for coal deliveries to third countries.”

Japan did not immediately comment on the report, but South Korea’s Foreign Ministry said Seoul was “monitoring any sanctions-evading activities by North Korea.”

Russia’s mission to the UN informed the Security Council sanctions committee on November 3 last year that Moscow was complying with the sanctions.

The United States, which has led the sanctions effort at the Security Council, put the owner of one of the ships, the UAL Ji Bong 6, under sanctions on Wednesday for allegedly delivering North Korean coal to Kholmsk on September 5, 2017.

The UN has imposed several rounds of sanctions against Pyongyang, mostly under US pressure,  to put a halt on its nuclear and missile programs. Pyongyang, however, defends its military program as being defensive in nature and a deterrent against hostility by foreign powers.

If confirmed, the report of shipments suggest that some UN member states disregard aggressive US attempts to put a stranglehold on North Korea, continuing to trade with the country.

In another report last month, Reuters claimed that Russian tankers had supplied fuel to North Korea at sea.