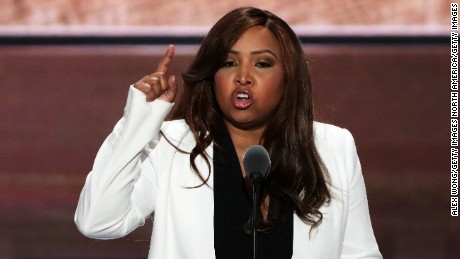 Patton, who is also a former Trump campaign surrogate, deleted the tweet and said the slur was “beneath me”.

She said: “I deleted my last tweet by choice. No one from this Administration contacted me. It was beneath me and I apologize to April Ryan. My parents raised me to respect others and I regret my response. I apologize to them, Secretary Carson, and the Trump family. They deserved better.”

Ms Patton, who previously worked as a long-time event planner for the Trump family, added: "Tonight, I made an inexcusable comment on my personal Twitter account that I deeply regret and deleted on my own volition."

Ryan, who works as the White House correspondent for American Urban Radio Networks and frequently appears on CNN, hit back at Patton’s original tweets. She told Patton to “kick rocks” and quipped she was a “washed up wedding planner”.

Patton, who was appointed to head a regional office of the Department of Housing and Urban Development last June, was a vice president at the Eric Trump Foundation from 2011 until January 2017.

Patton came under fire for lashing out at the veteran journalist on Twitter with Brian Klaas, a Washington Post columnist, tweeting that Patton's comments were "indefensible" and calling on her to resign.

This is not the first time Ryan has found herself subject to criticism from someone affiliated with the Trump administration.

Spicer appeared to become annoyed after Ryan asked him what the Trump administration would do to restore its public image following its slew of controversies and reports of its ties to Russia.

Spicer, who left his job last July, became visibly defensive as he responded to the journalist’s question about Russia and argued everyone has reached the conclusion there was no “collusion” between the Trump campaign and Russia.

The former Trump aide, who was famed for his gaffes, said: “I'm sorry that disgusts you. You're shaking your head”.

Spicer said Ryan appeared "hell-bent" on pushing her own image of the White House when she asked what Trump might be doing to repair his relationship with former Secretary of State Condoleezza Rice who did not support his campaign.