TEHRAN, January 26 - A major fire in a hospital in South Korea has left at least 41 dead and more than 70 injured, local media reported. 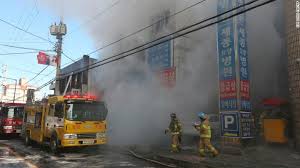 TEHRAN, Young Journalists Club (YJC) - The fire is suspected of having started in an accident and emergency room on the first floor of a hospital in Miryang, 170 miles southeast of the capital Seoul.

Firefighters were pictured trying to extinguish the blaze, which left thick plumes of smoke rising into the sky.

Reports said more than 100 patients were inside the hospital building and a nearby nursing home when the fire started.

Authorities warned that the death toll was likely to rise.

The blaze began around 7.30 am local time (22.30 GMT) at the rear of the emergency room of Sejong Hospital and most of it had been put out after a few hours, Choi Man-woo, the head of Miryang fire station, said.

Firefighters were still in the process of evacuating the roughly 200 people inside the main hospital building and nursing home directly behind the hospital, he said.

Local news channel YTN showed black smoke billowing from the windows and entrance to the hospital and flames flickering.

South Korean Prime Minister Lee Nak-yeon ordered all possible equipment and personnel be used to fight the blaze, adding the hospital should be quickly searched to save as many lives as possible, his office said in a statement.