TEHRAN, January 27 - Saudi Arabian billionaire Prince Alwaleed bin Talal, detained in the kingdom’s sweeping crackdown on corruption, said on Saturday that he expected to be cleared of any wrongdoing and released from custody within days, with his vast assets intact. 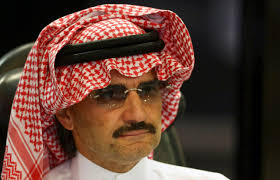 TEHRAN, Young Journalists Club (YJC) - Prince Alwaleed was speaking in an exclusive interview with Reuters at his suite in Riyadh’s Ritz-Carlton hotel, transformed into a luxurious prison to hold tycoons and royals.

He has been confined there for more than two months along with dozens of other suspects, part of Crown Prince Mohammed bin Salman’s bold plan to consolidate control.

It was the first time the prince, one of the nation’s most prominent businessmen, has spoken publicly since his detention.

Alwaleed said he was continuing to maintain his innocence of any corruption in talks with authorities. He said he expected to keep full control of his global investment firm Kingdom Holding Co (4280.SE) without being required to give up assets to the government.

He described his confinement as a misunderstanding and said he supports reform efforts by the crown prince, known as MbS.

“There are no charges. There are just some discussions between me and the government,” he said in the interview, conducted shortly after midnight. “I believe we are on the verge of finishing everything within days.”

Alwaleed appeared grayer and thinner than in his last public appearance, a television interview in late October, and had grown a beard while in detention.

“I have nothing to hide at all. I‘m so comfortable, I‘m so relaxed. I shave here, like at home. My barber comes here. I‘m like at home, frankly speaking,” he said.

“I told the government I’d stay as much as they want, because I want the truth to come out on all my dealings and on all things that are around me.”

Alwaleed, in his 60s, is the face of Saudi business for many foreigners, often appearing on international television covering his diverse investments and lifestyle.

A 30-minute interview, including a tour of his suite, was granted largely in order to disprove rumors of mistreatment and of being moved from the hotel to a prison.