TEHRAN, January 27 - Joe Biden keeps scoffing at Russia and seems to genuinely believe it is a rapidly declining power. This incorrect assumption suggests senior US politicians are receiving extremely poor intel on the subject. 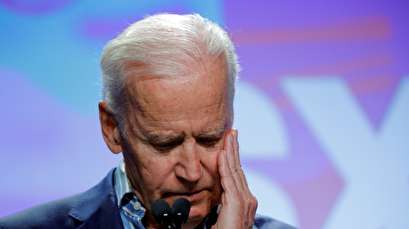 At first glance, Biden would make an unlikely fan of the Scottish writer J.M. Barrie, but he may well have read Peter Pan a few times. His continued obsession with talking about Russia’s “enormous decline” sounds like something the boy who never grows up might have conjured: ‘dreams do come true, if only we wish hard enough.”

Biden and his old boss Barack Obama have both delivered various renditions of this trope over the years. With the former’s first recorded foray in 2009. He was at it again this week, mocking Russia in front of the Council on Foreign Relations.

Biden was being interviewed by Richard Haass, a neoconservative who believes the US should adopt “an imperial foreign policy.” During the chat he again publicly exposed his complete ignorance of Russia, which leaves one wondering how poorly US leaders are briefed on the subject.

“Look at the state of Russia now. They’re in enormous decline. They’re—by any definition, these guys are on a toboggan run,” he smirked. “They have a second-rate military power. They have significant advantages geographically, where they’re engaged. They have a nuclear arsenal that is—can blow up the whole world. But in terms of their efficacy, their capacity is de minimis compared to ours. They’re in a situation where they’re an oil-based economy.

“Their life expectancy is changing. They’re expected to be a 20 percent smaller population by 2050,” he added.

The problem is Biden’s contentions have something else in common with Barrie’s work. They are fictional. Since the turbulent 1990s, when the country was recovering from the collapse of the Soviet Union and forced to reinvent its economic and political systems, Russia has experienced considerable growth, which suggests a state that is doing rather well, by contrast to the chaos of the initial post-communist period.

For the sake of simplicity, let’s start from the turn of the century. Back in 2000, Russia’s total GDP (when measured by the more realistic purchasing power parity model), was around $1.6 trillion. Today, it sits at $4 trillion, according to the IMF. Meanwhile, in nominal GDP terms, the recovery has been even more stark, shooting up by around 500 percent, albeit in decline since the 2014 Ruble crisis, which saw the currency devalue sharply against the US dollar.

At the same time, the statement that Russia is an “oil-based economy” was arguably accurate in 2008, when fossil fuel revenues accounted for more than 50 percent of the state budget. However, today an agriculture and manufacturing boom has reduced reliance on this sector.

For instance, last year Russia exported more grain and wheat than any other country in the world. It also surpassed France in sugar beet production. What’s more, a new fiscal rule obliges the Kremlin to allocate all oil-revenues above $40 a barrel to the reserve fund. Which shows it has learned from the mistakes of the past and is thinking about future rainy days, rather than short-term fixes.

Biden also labelled Russia a “second-rate” military power. But according to “Global Firepower” the country boasts the second most powerful armed forces in the world, just behind America, and ahead of China. It is worth noting the index does not take into account nuclear weapons, of which Moscow has the largest stockpile. If Biden believes the Russian military is “second-rate,” what does he think of US allies Britain and France, who are believed to have less than half the martial strength of Russia?

We also can’t let the former Vice President off the hook for spouting disinformation around 2050 demographic projections. Even Washington’s own Population Reference Bureau is predicting an 11 percent fall in Russia’s population over the next 32 years. Which is a long way off Biden’s 20 percent. Meanwhile, the United Nations suggests a 6 percent decrease.

Despite economic and social challenges, and given Russia’s tumultuous history, it’s actually reasonable to argue Russia has rarely been more stable than it is today. A tough recession has just ended and modest economic growth has resumed with inflation at record lows and unemployment negligible. Furthermore, fertility rates are the highest in eastern Europe. Also, when you analyse crude birth rates, Russia outranks the likes of France, Australia, Britain, Canada and the United States. Something Biden might want to consider more closely.

What’s especially depressing about Biden’s consistently misinformed gibberish is how he’s so sincere in his beliefs. And this element is especially worrying because if senior American politicians are so poorly briefed on Russia, it becomes obvious that they will underestimate its strength. This surely encourages them to be more aggressive in baiting the Kremlin, an arrogance that could one day lead to a direct confrontation between the US and Russian militaries, something which was avoided during the Cold War.

Of course, back then American politicians had access to genuine expertise on Russia. Today, that’s been outsourced to hucksters who know little of the country. And Biden’s ignorance is proof of how dangerous this situation has become.