TEHRAN, January 27 -Czechs wrapped up voting on Saturday in a presidential election run-off where pro-western academic Jiri Drahos is trying to oust incumbent Milos Zeman, who has split the nation by courting Russia and China and leaning towards far-right groups. 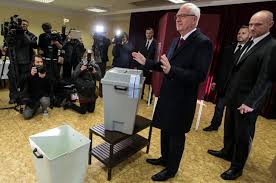 TEHRAN, Young Journalists Club (YJC) -Czechs wrapped up voting on Saturday in a presidential election run-off where pro-western academic Jiri Drahos is trying to oust incumbent Milos Zeman, who has split the nation by courting Russia and China and leaning towards far-right groups.

The election is seen as a referendum on Zeman, 73. The last prominent figure among active politicians from the country’s transitional period in the 1990s, he has pleased some but alienated others by publicly belittling opponents ranging from the last prime minister to intellectual elites and the press.

The vote, expected to be almost even, reflects the divisions between liberals and conservatives seen elsewhere in Europe and the United States. Zeman has taken a tough stance on immigration and backed Donald Trump in the 2016 U.S. presidential election.

The Czech constitution gives presidents limited executive powers, but Zeman has not hesitated to test the boundaries. In 2013, for example, he appointed a caretaker government of his allies for five months against the will of parliament.

While the last poll put Drahos, 68, three percentage points ahead of the incumbent, betting odds showed the opposite, slightly favoring Zeman.

A victory by Drahos could bring a voice more in tune with the European Union into Czech politics and help set it apart from its ex-communist peers Poland and Hungary, which have locked horns with the EU.

“Zeman never questioned the Czech membership in the EU, but on the other hand he said he would welcome a referendum on exit and in practice he significantly deviated from both EU and NATO,” said political analyst Michael Romancov.

“It is clear that Jiri Drahos is unequivocally pro-EU and an euro-Atlantic candidate.”

Zeman has benefited from rising Czech hostility to immigration, especially from Muslim countries, although the country received just 116 asylum applications between January and November last year.

The country has a Muslim minority of just several thousand but warnings of security risks and loss of identity feature strongly in public debate.

Both Zeman and Drahos have rejected the EU’s refugee quotas, but unlike Zeman, Drahos has said his country should differentiate between economic migrants and war refugees and follow its asylum procedures.