TEHRAN, January 27 -US President Donald Trump is using the “emigration controversy” to further divide Americans along political psychological lines using his proposed wall on the US/Mexican border as a symbolic, rather than tangible concept, according to Walt Peretto, a writer and researcher based in Washington, DC. 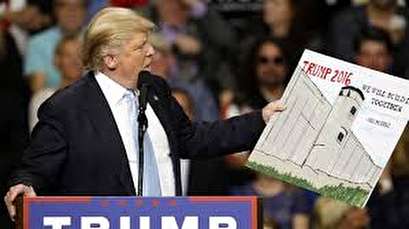 TEHRAN, Young Journalists Club (YJC) -US President Donald Trump is using the “emigration controversy” to further divide Americans along political psychological lines using his proposed wall on the US/Mexican border as a symbolic, rather than tangible concept, according to Walt Peretto, a writer and researcher based in Washington, DC.

“Divide and conquer is a concept and a technique that has been used by tyrants to control masses of common people since at least the era of the Roman Empire. The presidency of Donald Trump is completing one full year, and his administration has been defined by division,” Peretto told Press TV on Friday.

“The political division in the United States right now has never been stronger. People who are psychologically locked into the left/right paradigm have never been more polarized. The common enemy of the people is not the Republican ideology or the Democratic ideology---it is the people behind the scenes who promote figure-heads to lead both the right and the left,” he stated.

“The idea is to engineer people's minds to think in an extremist, binary manner by keeping the common people divided. There is no chance for the majority of people to challenge the pathological who hold the true power in the world. Donald Trump has used the immigration controversy to divide proponents of sound immigration policies against those who take a 'closed border' stance,” the analyst said.

“No matter what legislation is on the books--emigrants are moving to the United States is large numbers and have been for a long time,” he added.

“Trump is financially backed by groups who want to break down the concept of the nation state through foreign economic intervention, and sometimes violence, to encourage mass migrations,” he said.

“I totally support people who decide to pack up and leave their home to seek 'fertile ground' elsewhere. If the world wasn't so purposely destabilized by economic manipulation and violence, you would not see such mass movements of populations,” he continued.

“Trump has proposed a deal that would allow 1.8 million people to become US citizens in exchange for the funding of a wall on the US/Mexican border to deter immigration into the United States. The whole concept of this wall, in which Trump campaigned on, is more symbolic than tangible, in my opinion. It is more of a 'monument' honoring the divide and conquer technique that people like Trump have used for millennia,” the commentator said.

“The people in these positions of power are generally pathological individuals. They don't have the neuropsychological basis to feel the emotions that bind normal people together. This is why they are obsessed with dividing us,” Peretto noted.

“If you look at history, you will see a number of examples -- the Great Wall of China, Hadrian's Wall, and the Berlin Wall. Now, many would say this was for defensive purposes...but I guarantee you...these empires were busy dividing their own populations psychologically, while sometimes dividing common cultures physically. An example would be the Berlin Wall, where for decades, families were divided. In what is now Northern England/Southern Scotland, families were divided by the Romans,” he explained.

“This is all about pathological control freaks using the common masses as pawns. Trump is just another manifestation of a cult of personality for people to vent their frustrations on. What people need to do is step back and train their minds to see the big picture, instead of focusing on triviality that is contrived by the pathological groups that control their social psyche,” he said.

“While the pathological have been using divide and control since time immemorial, the time has come for us to create new techniques of dividing and controlling the organized psychopaths who not only run the world, but are destroying it,” the researcher concluded.