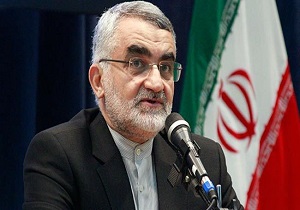 TEHRAN, Young Journalists Club (YJC) - Denouncing the US President’s internal and foreign policies,  Alaeddin Boroujerdi, Chairman of the Committee for Foreign Policy and National Security of the Iranian Parliament told reporters on Sunday that the US, “influenced by the Zionist regime, is trying to misrepresent the face of Iran. This scenario is a part of a plan, proposed by the triangle of the US, Saudi Arabia, and Israel.”

Referring to the regime change scenario in Syria, Boroujerdi said “this is a futile attempt. Islamic Republic of Iran will defend Syria’s territorial integrity, as defending Syria and its people has been our important mission in recent years.”

“By committing these actions, the US shows its support for terrorism as well as instability and disintegration of foreign countries. But, surely, its attempts will not come to any conclusion,” Chairman of the Committee of National Security and Foreign Policy stressed.

Commenting on Turkey’s military operation in Syria’s Afrin, Boroujedi said “this is Turkey’s reaction to the actions of the Americans.”

“After the US and its allies were defeated in Syria, and that ISIS project left Americans disappointed, they tried to disintegrate the country with the help of a Kurdish army, whose 30 thousand personnel were trained by American advisors. Even so, they were constantly defeated,” he added.