According to the Turkish military, its navy has managed to stop a Greek coast guard motorboat and a patrol ship from approaching the disputed island of Imia (Kardak) in the Aegean Sea. 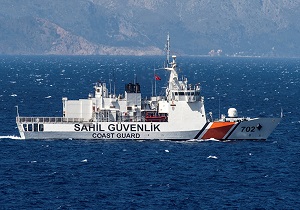 TEHRAN, Young Journalists Club (YJC) - "On the 28th of January at approximately at 11:30 a.m. a Greek coast guard motorboat and a patrol ship attempted to enter the waters near Kardak Island. The Turkish navy prevented their attempt to approach this island,” reports the Turkish military department, according to Sputnik.

It was also noted in the report that the Turkish Armed Forces will continue “to defend national interests according to international law.”
Turkish news agency Anadolu, citing Turkish Ministry of Internal Affairs, reports that the Greek Minister of Defense Panos Kammenos was on board the motorboat.

In 1996, the dispute over the territorial affiliation of the two rocky islets of Imia in the Dodecanese archipelago in the Aegean Sea led to a crisis in relations between Greece and Turkey. The conflict was terminated after the intervention of the international community, NATO and the United States. During the last days of the crisis, on January 31, 1996, a helicopter from the Hellenic Navy crashed in the conflict area, three Greek officers were killed. Technical problems were said to have caused the accident.