Erdogan: Turkey will clean its entire border with Syria from terrorists 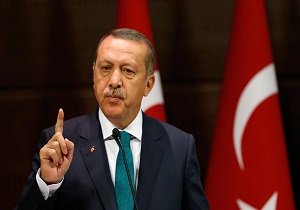 TEHRAN, Young Journalists Club (YJC) - Addressing a congress of his ruling AK Party in the northern province of Amasya, Erdogan stated that Turkey would ensure that the Syrian refugees the country hosts could return to their homes after the border is cleared of militants.

Since the launch of the military offensive, Turkish forces had eliminated 394 Kurdish and Daesh fighters and the country's aviation has destroyed 340 targets during the operation, as the country's General Staff announced on January 27.

Meantime the Syrian SANA news agency has reported the same day that about 86 civilians had been killed and 198 others wounded, adding that the assault had caused damage to civilian infrastructure, including residential areas and archaeological sites.