US gathers UN envoys to build missile case against Iran

TEHRAN, January 28 - United Nations Security Council (UNSC) envoys are set to visit Washington to see debris purportedly from a Yemeni missile that reached deep inside Saudi territory last year, with the US claiming that it was supplied by Iran. 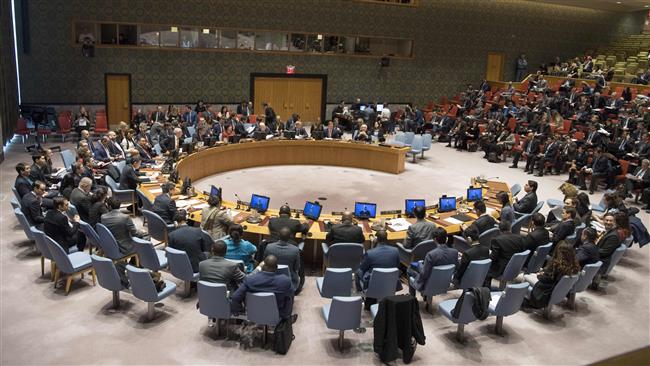 TEHRAN, Young Journalists Club (YJC) - The envoys will visit a military hangar in Washington on Monday, where US Ambassador to the UN Nikki Haley presented the remnants of an alleged Iranian-made ballistic missile fired from Yemen on November 4 at the King Khalid International Airport near the Saudi capital, Riyadh.

According to the US's UN mission, Haley and her 14 council colleagues will also lunch with US President Donald Trump.

On December 14, Haley presented what she claimed to be "undeniable" evidence, including the allegedly recovered pieces of the Yemeni missile, saying it proved that Iran was violating international law by giving missiles to the Houthi Ansarullah movement.The Houthis have been fighting back a Saudi-led aggression with allied Yemeni army troops and tribal fighters.

A few days later, she said that the UNSC could strengthen the provisions in Resolution 2231, which was approved in July 2015 to endorse the multilateral nuclear deal with Iran, or adopt a new resolution banning Tehran from all activities related to ballistic missiles.

Iran's UN mission categorically dismissed Haley's allegations against the Islamic Republic as "unfounded," stressing that "this purported evidence ... is as much fabricated as the one presented on some other occasions earlier."

"These accusations seek also to cover up for the Saudi war crimes in Yemen, with the US complicity, and divert international and regional attention from the stalemate war of aggression against the Yemenis," the mission said in a statement .

It further accused the US government of being "constantly at work to deceive the public into believing the cases they put together" to advance its agenda in the region.

Moreover, a panel appointed by the Security Council said that it had seen no evidence to support the claims that missiles had been transferred to Houthi fighters by external sources.

US steps up anti-Iran lobbying campaign

In addition to the US lobbying efforts against Iran's peaceful missile activities, the Trump administration has for months been threatening to quit the nuclear accord, officially called the Joint Comprehensive Plan of Action (JCPOA), if its “disastrous flaws” are not fixed.

Speaking at the end of a week-long European trip in Warsaw on Saturday, US Secretary of State Rex Tillerson said that working groups on fixing the "flaws" in the deal had already begun to meet.

Tillerson claimed that he had secured support from Britain, France and Germany, the European signatories to the JCPOA, to work on the agreement.

"The working groups have already begun to meet on efforts to agree principles, what is the scope of what we attempt to address and also how much we engage Iran on discussions to address these issues," he said.

The top US diplomat further said the nuclear deal was only a "small" part of Washington's policy in the Middle East and Washington was more concerned about Iran's alleged support for the Houthis.