TEHRAN, January 29 - Qatar inked a memorandum of understanding with Oman to promote investment and trade between the two countries amid an ongoing blockade imposed on Doha by a Saudi-led bloc. 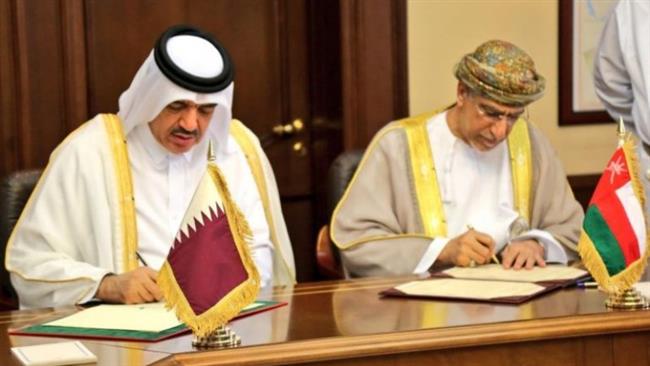 TEHRAN, Young Journalists Club (YJC) - The Omani news agency ONA reported that the agreement was signed in Muscat on Sunday.

According to the report, the memorandum covers a wide range of cooperation sectors including the production and export of food products from Oman to Qatar.

For his part, Qatar’s Minister of Municipalities and Environment Mohamed bin Abdallah al-Rumaihi, who headed the Qatari delegation, hailed his country's "strategic relations" with the sultanate.

Saudi Arabia, the United Arab Emirates (UAE), Bahrain and Egypt all cut off diplomatic ties with Qatar and imposed a trade and diplomatic embargo on the emirate in June last year, after officially accusing it of “sponsoring terrorism”. Doha strongly denied the allegation.

The Saudi-led bloc presented the emirate with a list of demands, among them downgrading ties with Iran, and gave it an ultimatum to comply with them or face consequences. Doha, however, refused to meet the demands and said that they were meant to force the country to surrender its sovereignty.

Turkey and Iran were quick to ease the economic stranglehold on the tiny Arab nation, flying food and other commodities as the diplomatic fallout escalated.

On January 10, a high-ranking Qatari official described the ongoing Saudi-led diplomatic and trade boycott against his energy-rich Persian Gulf country as “economic warfare,” stressing that Doha plans to seek compensation for those hit by the sanctions.

Oman, a member of the six-nation Persian Gulf Cooperation Council along with Bahrain, Kuwait, Qatar, Saudi Arabia and the United Arab Emirates, generally remains neutral in such regional rows.