TEHRAN, January 29 - Turkey detained more than 300 people for social media posts criticizing its military offensive in Syria, the government said on Monday, a day after President Tayyip Erdogan accused doctors who opposed the campaign of betrayal. 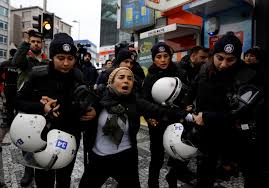 TEHRAN, Young Journalists Club (YJC) - Since launching its 10-day-old air and ground offensive against the Kurdish YPG militia in Syria's northwestern region of Afrin, Turkish authorities have warned they would prosecute those opposing, criticizing or misrepresenting the incursion.

The Interior Ministry said on Monday a total of 311 people had been held for "spreading terrorist propaganda" on social media in the last 10 days. Detainees have included politicians, journalists and activists.

Turkey considers the U.S.-backed YPG, which controls Afrin, to be a terrorist group and an extension of the Kurdistan Workers Party (PKK) which has fought an insurgency in Turkey's largely Kurdish southeast since 1984.

The military operation has been widely supported by Turkey's mainly pro-government media and by most political parties, with the exception of the pro-Kurdish Peoples' Democratic Party (HDP). But there have been dissenting voices.

Over the weekend, Turkish media reported that 170 artists had written an open letter to lawmakers from Erdogan's ruling AK Party calling for an immediate end to Turkey's incursion.

On Sunday, Erdogan accused the union of treason. "Believe me, they are not intellectuals at all, they are a gang of slaves. They are the servants of imperialism," he told AK Party members in the northern province of Amasya.