TEHRAN, January 29 - A court in Bahrain upholds a one-year jail term for prominent Shia cleric, Sheikh Isa Qassim, who has been stripped of his nationality by the Al Khalifah regime and confirms the decision to revoke the cleric's citizenship. 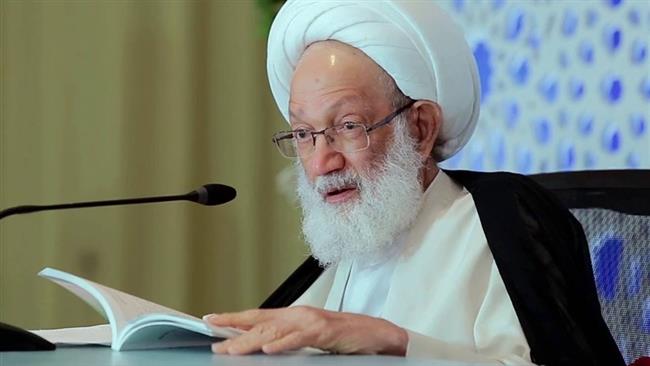 On May 21 last year, a Bahraini court convicted Sheikh Qassim of illegal collection of funds and money laundering, and sentenced him to one year in jail suspended for three years.

It also ordered him to pay $265,266 in fines. The court ruling sparked widespread demonstrations across the kingdom.

Bahraini authorities stripped the cleric of his citizenship on June 20, 2016. They later dissolved the Islamic Enlightenment Institution, founded by him, in addition to the opposition al-Risala Islamic Association.

Bahraini regime's harsh treatment of the Shia clerics comes despite the fact that Sheikh Qassim is reportedly suffering from high blood pressure, diabetes, and heart disease.

United Nations spokesman, Stephane Dujarric, demanded last November that the top Shia cleric be released, and asked for immediate medical attention for him.

Meanwhile, Bahraini officials have deported two Shia brothers to Iraq as the ruling Al Khalifah regime presses ahead with its heavy-handed crackdown and persecution of the members of the religious community in the country.

Human rights activists published the pictures of Ibrahim and Ismail Darwish in Iraq's holy city of Najaf hours after deportation from Iraq.

Bahraini monarch, King Hamad bin Isa Al Khalifah, stripped a number of citizens, including the two brothers, of their nationality back in November 2012.

On March 5, 2017, Bahrain’s parliament approved the trial of civilians at military tribunals in a measure blasted by human rights campaigners as being tantamount to imposition of an undeclared martial law countrywide. King Hamad ratified the constitutional amendment on April 3 last year.