TEHRAN, January 30 - Iran's Senior Negotiator in the Astana Peace Process for Syria and Senior Assistant to the Iranian Foreign Minister Hossein Jaberi-Ansari met with UN's Special Envoy for Syria Staffan de Mistura on the sidelines of new round of Syrian peace talks in the Russian City of Sochi. 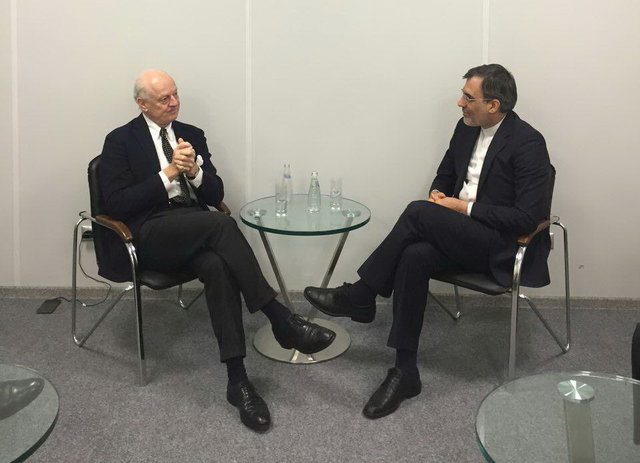 TEHRAN, Young Journalists Club (YJC) - Ansari is attending the opening of Syrian Congress of National Dialog as representative of Iran.

Ansari and de Mistura studied activities of Syrian Congress of National Dialogue as well as the upcoming programs of de Mistura in Syria and stressed further consultation and cooperation to bring an end to the Syrian crisis.

Talks between the Syrian government and the opposition in Sochi entered their second and final day on Tuesday in the hope of paving the way for a peaceful settlement of the conflict gripping the Arab state.

The Syrian Congress of National Dialog started out on Monday and continued on Tuesday. The talks are moderated by Russia and Iran, on the side of Damascus, and Turkey, which aligns itself with several armed opposition groups.

The discussions are meant to build on the results of many rounds of negotiations between Damascus and the opposition, which were held in the Kazakh capital of Astana last year, according to Presstv.

The Astana process came after the guarantor states helped bring a ceasefire to Syria’s second city of Aleppo, and then to entire Syria, which has been witnessing foreign-backed militancy since 2011.

It resulted in the establishment of four deescalation zones across Syria, and was hailed by the United Nations for its contribution to a parallel process, which the world body has been mediating between Damascus and the oppositionists in Geneva.