Breaking down Trump's 1st State of the Union address

TEHRAN, January 31 -President Donald Trump has delivered his first State of the Union address to Congress, lauding his administration’s accomplishments over the last year and outlining his vision for “building a safe, strong, and proud America.” 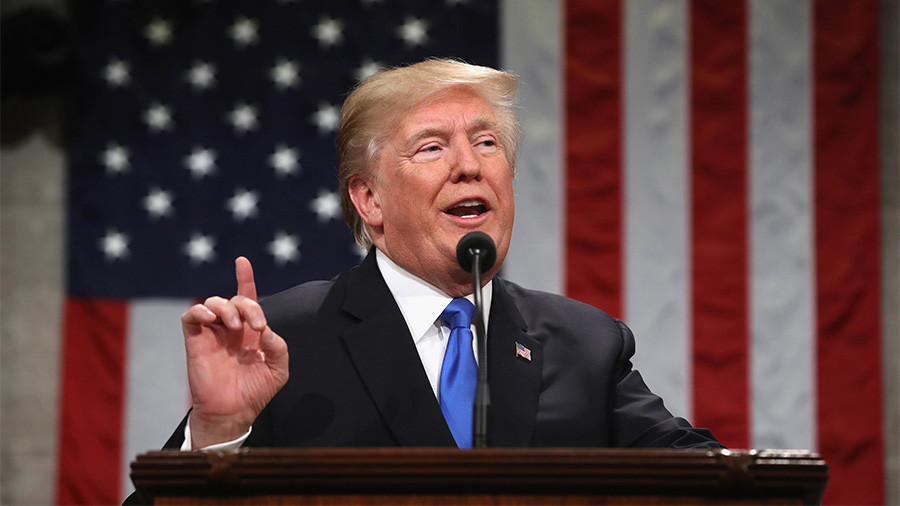 TEHRAN, Young Journalists Club (YJC) - President Donald Trump has delivered his first State of the Union address to Congress, lauding his administration’s accomplishments over the last year and outlining his vision for “building a safe, strong, and proud America.”

Watch Trump's remarks in their entirety below. Trump started his speech with naming the hardships the country went through in 2017, from hurricanes to fires to the Las Vegas shooting and talked about the need of unity.

"I call upon all of us to set aside our differences, to seek out common ground and to summon the unity we need to deliver for the people," he said.

He then went on touting the economic successes due to tax cuts.

He said that since the 2016 election, "2.4 million new jobs, including 200,000 new jobs in manufacturing alone" have been created and unemployment claims have hit a 45-year low.

"After years and years of wage stagnation, we are finally seeing rising wages," he said.

"The great news for Americans, 401K, retirement pension, and college saving accounts have gone through the roof," he said. "And just as I promised the American people from this podium 11 months ago, we have enacted the biggest tax cuts and reforms in American history."

Heralding "a new American moment," he said “faith and family, not government and bureaucracy, are the center of American life.”

He praised his government for eliminating more regulations than “any administration in the history of our country” and ending the war on American energy and “beautiful clean coal.”

Trump called on Congress to produce a bill generating $1.5 trillion for the new infrastructure investment our country so desperately needs, leveraging every dollar for private partnerships to overcome the infrastructure deficit. “Together we can reclaim our great building heritage,” he said.

He said that he also wants “Motor City revving its engines again” and that companies that were leaving the US are “roaring back.”

He also called for investing in workforce development and job training. “And let’s support working families by supporting paid family leave,” he said.

Among the top priorities for the next year Trump promises to bring down the prices of drugs, attacking Big Pharma.

“And prices will come down, substantially. Watch,” he said.

Trump also addressed immigration reform disagreements, which caused the recent government shutdown. He called on Congress to finally close the deadly loopholes that allowed gangs like MS-13 to break into our country.

“The US is a compassionate nation,” he said, "We help the needy, the suffering and underprivileged around the world. But my concern is for America’s children, America’s struggling workers and America’s forgotten communities. I want our poor to have their chance to rise.”

He said that his duty is to protect Americans and their right to the American dream, “because Americans are dreamers too.”

Trump said that around the world the US faces terrorists and rivals like Russia and China, countries which he only mentioned once by name, that challenge our economy and values.

“Weakness is the surest path to conflict," he said calling on Congress to end the defense sequester and “fully fund our great military.”

“We must modernize and rebuild our nuclear arsenal, hopefully never having to use it," he said.

Besides criticizing bureaucrats, he made an attack on protests during NFL games when people didn't stand for the national anthem.

Each year, the president of the United States delivers a speech to the American people outlining the administration’s legislative agenda for the coming year.

Since almost all most high-ranking officials attend the event each year, one member of the president’s Cabinet is selected to stay at a secure undisclosed location outside Washington DC should they be killed in an attack.

This year, Agriculture Secretary Sonny Perdue will serve as the “designated survivor.” The agriculture secretary position is the ninth in the line of succession.