TEHRAN, January 31 - A senior Iranian lawmaker said the country joined the UN Convention against Transnational Organized Crime so the US could not have any excuse on activating global banking system. 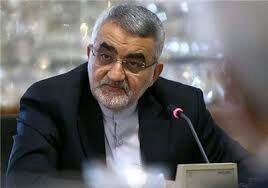 TEHRAN, Young Journalists Club (YJC) - On Sunday, the Iranian parliament has passed a bill to join the United Nations Convention against Transnational Organized Crime. The lawmakers overwhelmingly passed the bill that had been submitted to the parliament four years ago.

As to certain critics to the bill, Chairman of Iranian Parliament National Security and Foreign Policy Commission Alaeddin Boroujerdui said some cases which run counter to Iran’s rules cannot be implemented.

Approving the bill aims at getting any excuse from the US on its refusal to activate global banking system, he said.

He said that at time of approving the bill, Iran had said it would not implement those parts of the convention which are against the country’s laws.

Asked about advantages of joining the convention, the lawmaker said, “There are some laws that we want to approve them so that there would be no excuse for the US about activating global banking system. we want to obey these points, so there will be no excuse.”