TEHRAN, January 31 - At times, separating trash between paper and plastic can be time-consuming. But it's nothing compared to the recycling efforts of residents in Kamikatsu, a small village in southwestern Japan. 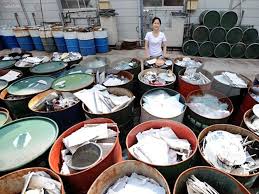 In 2003, the city embarked on a rigorous zero-waste program. The city used to incinerate its trash, but eventually realized how damaging it was to the environment.

Waste incinerators have been shown to emit vast quantities of greenhouse gases and toxins that can damage the food supply.

It took time for residents to adjust to the tedious task of washing, sorting, and bringing their trash to the town's sorting centre. (Although the residents do sort their trash before they bring it the centre, workers there make sure the trash goes into the right bins.)

This process is now routine.

The town also has a store where people can leave clothing or furniture they don't want, exchanging their old stuff for free data-x-items that others have dropped off.

Down the street, there's a factory where local women make products from discarded products, like teddy bears from old kimonos.

“We are trying to focus more and totally change our lifestyles,” said Akira Sakano, deputy chief officer of the Zero Waste Academy, a non-profit that works towards Kamikatsu's sustainability goals.

Now 80% of the town's garbage is recycled, reused, or composted, with the rest going to a landfill.

The process saves the village a third of its former costs from waste incineration. By 2020, Kamikatsu hopes to be completely zero-waste.

Globally, the amount of trash produced is growing faster than the rate of urbanization, according to a 2015 World Bank report. By 2025, the organization estimates that 1.4 billion more people will live in cities worldwide, with each person producing about 3 pounds of waste per day - more than double the current average.

Japan produces nearly half the amount of waste per capita as the US.

Beyond Kamikatsu, cities around the world are trying to reduce their waste footprints.

For example, in 2015, San Diego announced its plan to reduce trash disposal by 75% by 2030 and become completely waste-free by 2040. New York City has similarly ambitious plans, hoping to be waste-free in about 15 years.