Stalingrad at 75: Five ways in which iconic battle turned tide of WW2

TEHRAN, February 2 -February 2 marks the 75th anniversary of the German surrender at Stalingrad. While the five-month battle remains a symbol of World War II, its practical importance to defeating the Nazis deserves more attention. 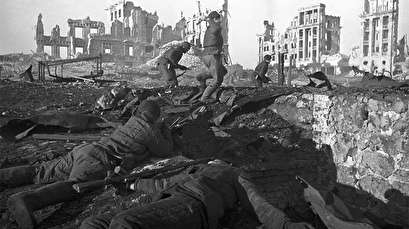 Stalingrad was the biggest and bloodiest battle in the history of warfare. Estimates vary, but fighting between August 1942 and February 1943 is thought to have resulted in up to 2 million casualties, with more than a million dead.

This was not just a reflection of the forces involved, but the specific circumstances. Adolf Hitler’s increasingly obsessive desire to capture the city as he lost more and more troops came up against the resilience of the Soviets, who were defending their homeland under Joseph Stalin’s newly-issued Order 227 (“Not one step back!”).

The battleground was the bombed-out hulk of the city, providing the stage for the most notorious and vicious street fight in history – still known as the “Rat War” by the Germans – in which there was equal threat from being picked off by a sniper, ambushed crossing the road, or bayonetted in a sewer at night. The latter was a tactic favored by the Russians, who wanted to ensure the advancing army was constantly sleep-deprived and anxious.

This was a war of attrition that Germany could afford far less than the Soviet Union.

“For the Germans it becomes a meat grinder. Every division they send in is weakened, so they have to pull new ones off the flanks. According to 6th Army’s loss figures, most divisions go in rated combat-ready. Within a week, they’re rated either as weak or exhausted. The attrition rate is phenomenal. The Luftwaffe’s rubbling of the city only exacerbates things. In early November, they run out of divisions,” is how American historian David Glantz described the course of the battle.

Share to
Related News
German wage deal should give some comfort to ECB
German police sue American tourist for calling them Nazis
Austrian president calls for far-right candidate's resignation over Nazi-content in song book
Army in Swedish ghettos? How Europe tries to adapt to migration instead of solving it
Tags
Stalingrad ، turned tide ، Nazis deserves
Your Comment