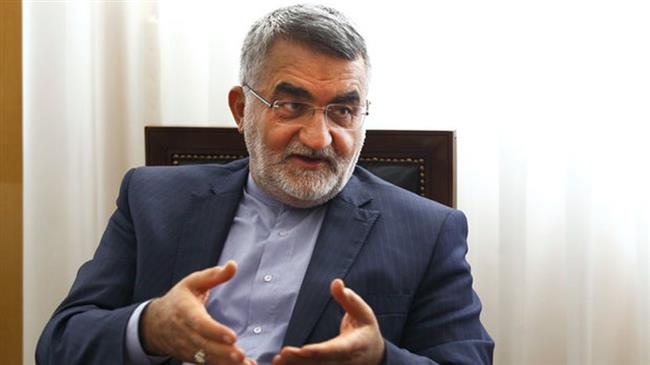 TEHRAN, Young Journalists Club (YJC) -  "The US move to display the missiles and attribute them to Iran is a political and ridiculous show…which follows two purposes," Chairman of the Iranian Parliament's Committee on National Security and Foreign Policy Alaeddin Boroujerdi said on Friday.

On December 14, US Ambassador to the UN Nikki Haley presented a charred tube and other material that she claimed were from an Iranian-made ballistic missile fired from Yemen at the King Khalid International Airport near the Saudi capital, Riyadh, on November 4. She claimed that that “evidence” proved Iran’s violation of United Nations resolutions banning the transfer of weapons to the Houthi Ansarullah fighters.

Both Iran and the Houthis have denied that the missile fired was Iranian.

Citing the two objectives of the US, Boroujerdi said US President Donald Trump aims to undermine the Islamic Republic's missile capabilities and prepare the ground for involvement in the issue which "is definitely a red line for the Islamic Republic of Iran."

"They [the US] also seeks to put a lid on Saudi Arabia's massive crimes [in Yemen]," the Iranian legislator said.

The US made the missile claims against Iran to distract the world public opinion from Saudi Arabia's brutal killing of tens of thousands of innocent people in Yemen, he said.

Despite denial of Iran and the Houthis, the US has not stopped making that far-fetched pitch. On January 29, the US hosted UN Security Council envoys to show them the purported missile parts.

"In the fake news department, Trump & Co. attempt to create an Iranphobic narrative at the UN Security Council -- through wining and dining and fake evidence provided by a warring neighbor," Zarif said in a post on his official Twitter account.

During the meeting, British deputy permanent representative to the UN, Jonathan Allen, shared an image showing what seemed to be a visibly intact cable with the writings “Made in Iran” and the emblem of the Institute of Standards and Industrial Research of Iran (ISIRI) on it.

In a post on his own official Twitter account on Tuesday, Foreign Minister Zarif used the picture used by Allen next to one of a packet of Iranian-made cheese puffs with the same ISIRI logo.

Zarif posted another tweet later, reminding that the ISIRI seal is used on Iranian consumer goods, not weapons.

A senior Iranian official also on Monday rejected unfounded US missile accusations against the Islamic Republic, saying Washington would never achieve any success in its "puppetry" against Tehran.

"They [US officials] directly accuse Iran of meddling in Yemen while they are indirectly denying the bravery, resistance and self-sacrifice of the Yemeni nation," Ali Akbar Velayati, a senior advisor to Leader of the Islamic Revolution Ayatollah Seyyed Ali Khamenei on international affairs, said in an interview with the IRIB.

The chief commander of Iran's Islamic Revolution Guards Corps (IRGC), Major General Mohammad Ali Jafari, in January dismissed the allegations leveled by the US and its allies about the Islamic Republic’s provision of missiles to Yemeni forces.

Jafari said, "Missiles fired at Saudi Arabia belong to Yemen, which have been overhauled and their range has been increased."