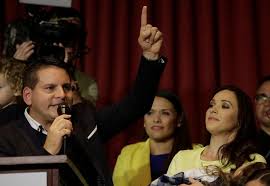 The 43-year-old Alvarado Munoz, the lone elected lawmaker for the evangelical National Restoration Party, shot to prominence as a candidate after denouncing a court ruling calling on Costa Rica to give civil marriage rights to same-sex couples.

“We propose the sovereignty of the family as the fundamental basis of society,” Alvarado Munoz told supporters blowing plastic horns after the results were announced.

“Costa Rica has sent a message to traditional parties - never again will they meddle with the family.”

With ruling-party contender Carlos Alvarado Quesada supporting gay marriage, the April 1 runoff looks set to effectively be a referendum on an issue that has polarized a country known for a laid back culture and its pristine nature.

The election could also be a taste of things to come in Latin America, where non-traditional candidates and outsiders are likely to make waves as around two-thirds of the region’s population chooses new governments this year.

Despite a history of progressive social policies, most Costa Ricans identify themselves as conservative, and evangelical Christianity has emerged as a religious and political force in recent years, reflecting similar changes across Latin America.

With results in from more than 80 percent of ballot boxes, Alvarado Munoz had 24.8 percent of the vote, while Alvarado Quesada had 21.6 percent. The two men are not related.

Under Costa Rica’s electoral rules a runoff vote takes place if no candidate reaches 40 percent support in the first round. The candidate with the third most votes, Antonio Alvarez Desanti, conceded on Sunday evening.

Alvarado Munoz called last month’s ruling by the Inter-American Court of Human Rights a violation of Costa Rica’s sovereignty and an affront to traditional values. He has threatened to pull Costa Rica out of the court, which is based in the capital, San Jose.

The coffee exporting country famed for its environmental stewardship has long offered a moderate two-party system and more stability than other countries in politically volatile Central America.

The shift in support towards issue-based politics and relative outsiders has been a shock for some of Costa Rica’s 3.3 million voters.

“I’ve been surprised by the growth of minority parties,” said voter Olman Gomez, 49, a computer network engineer. “It feels like you’re living in another country in terms of politics.”

A former labor minister under President Luis Guillermo Solis, British-educated Alvarado Quesada, 38, said on Sunday that he wanted to give Costa Rica the best education system in Latin America and reiterated his support for civil rights.

“The Costa Rica of the 21st century requires a government that knows how to move forward with vigor, love, happiness (and) the agenda of equality,” Quesada told jubilant supporters against a backdrop of loud rock music.

Solis, a former diplomat and history professor, won in a landslide four years ago but has seen his popularity fall as an investigation into an influence peddling scandal has unfolded.

He is barred by law from seeking a second consecutive term.