TEHRAN, February 6 -US President Donald Trump has accused Democrats of "treasonous" behavior for failing to cheer enthusiastically during his recent State of the Union address. 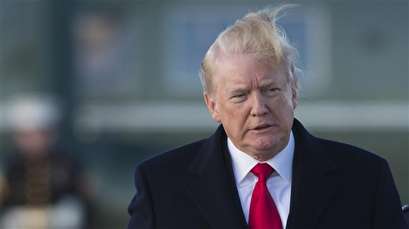 TEHRAN, Young Journalists Club (YJC) -US President Donald Trump has accused Democrats of "treasonous" behavior for failing to cheer enthusiastically during his recent State of the Union address.

Trump on Monday suggested that the behavior of Democrats during the State of the Union speech, which was delivered to a joint session of the US Congress on Tuesday night, 30 January, was “un-American.”

Trump denounced the lawmakers who failed to applaud during the address when he pointed out his achievements and “very positive news” in his speech, such as low unemployment rates for Hispanics and African-Americans.

"You're up there, you've got half the room going totally crazy, wild, they love everything, they want to do something great for our country," said Trump, referring to his Republican supporters in Congress. "And you have the other side, even on positive news, really positive news… they were like death, and un-American."

"Can we call that treason? Why not?" he asked during a speech in Ohio. "They certainly didn't seem to love our country very much."

Trump said the Democrats "would rather see Trump do badly than our country do well," describing their behavior as "very selfish."

Democrats and Republicans have been engaged in a bitter fight in Congress over a number of issues since Trump’s inauguration January last year.  Last month, Senate Democrats caused the government shutdown when Republicans failed to reach an agreement on the stopgap funding measure to continue government services.

Following days of hectic negotiations, Democrats agreed to end the government shutdown, after received a promise from after Senate Majority Leader Mitch McConnell to move on immigration bills including support for undocumented immigrants brought to America as children. The Senate voted to fund the government through February 8.

But Trump instead of appreciating Democrats, Trump taunted them of surrendering in the fight over the government shutdown.

Now Congress is again facing a Thursday deadline to fund the government and must act by March 5 to preserve protections for “Dreamers.”

Dreamers are hundreds of thousands of undocumented migrants brought into America as children who were protected from deportation until September 2017, when the Trump administration ended the Deferred Action for Childhood Arrivals (DACA), which was created by former US President Barack Obama.

Democrats had insisted on including in any spending bill protections for those covered under the DACA program, but last month they signed onto the measure to fund the government without them.