TEHRAN, February 11 - A deadly Hong Kong bus crash that killed 19 and left scores more injured was under investigation Sunday, with the city's leader calling for a wide-ranging inquiry as questions surfaced over the industry's long hours and low pay. 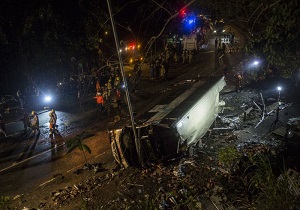 TEHRAN, Young Journalists Club (YJC) - Most victims of the accident on Saturday evening, which saw a double decker flip over and smash into a lamppost, were men aged in their 50s and 60s, according to local media. One man was 37.

There were heart-wrenching scenes at the site of the crash Sunday, as loved ones of the dead wailed with grief amid burning incense sticks at a makeshift commemoration.

"Come home," one mourner cried, while others were so overcome with emotion they had to be supported by companions.

Police said 19 were killed and 65 injured, some critically, after the vehicle overturned in the north of the semi-autonomous region. The driver has been arrested.

Most of the injured and some of the dead were on the upper deck of the bus, Chan Hing-yu of the fire department told reporters.

The driver was suspected of breaking the speed limit as he lost control of the vehicle driving downhill, senior police traffic superintendent Lee Chi-wai said.

He was not injured and was found to be sober, Lee added.

The accident has reignited concern over working conditions for bus drivers.

The vehicle was managed by the Kowloon Motor Bus Company, one of the main bus operators in Hong Kong.

Its "management is at fault, and it did not attach importance to traffic safety nor to the staffing structure, work and rest, and training of drivers", Lai Siu-chung, from the company branch of the motor transport workers union, said Sunday according to local broadcaster TVB.

Lai said the company's treatment of workers had led to labour shortages, adding that many drivers work under pressure and without adequate support.

"The industry wages of drivers have lagged behind inflation for many years... as a result the number of drivers working extra shifts and part-time have increased," said lawmaker Luk Chung-hung, who also questioned whether the company was paying enough attention to safety.

The company said it would pay compensation to survivors and victims' families, but has not specifically responded to these allegations.

Hong Kong's chief executive Carrie Lam, who visited survivors at several hospitals over the weekend, expressed "deep sorrow" and announced compensation Sunday for the families of the dead and injured.

She also pledged an independent investigation, calling for a broad examination of the city's bus franchise system.

Passengers told local media the bus was going too fast before the crash.

"It was much faster than I normally felt in a bus," one injured passenger told the South China Morning Post.

"And then it was like the tyre slipped, and the bus turned. It was really chaotic in the bus. People fell on one another and got tossed from side to side."

Before the crash, passengers had complained to the driver who was reportedly 10 minutes late and he then started speeding up, the Apple Daily reported, quoting injured passengers at the scene.

One injured passenger told the Oriental Daily it was like the driver was "intentionally using the bus to throw a tantrum".

Lawmaker Lam Cheuk-ting of the Democratic Party urged the government to rethink the design of double-decker buses, saying the upper decks had been "repeatedly torn off in accidents, posing a serious threat to passengers on the upper level".

He also called on the government to address the problem of drivers working long hours.

The southern Chinese city takes prides in its efficient public transport system but fatal accidents are not unheard off.

Hong Kong's worst bus accident occurred in 2003 when a double-decker collided with a truck and plunged from a bridge, killing 21 people. In 2008, 18 people were killed in another crash.