TEHRAN, February 18- The Russian men’s hockey team, which is competing under a neutral flag at the Winter Olympics in Pyeongchang, delivered a crushing 4-0 defeat to Team USA. 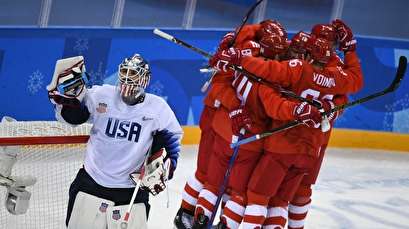 TEHRAN,Young Journalists Club (YJC) -The Russian men’s hockey team, which is competing under a neutral flag at the Winter Olympics in Pyeongchang, delivered a crushing 4-0 defeat to Team USA.

The Olympic Athletes from Russia took the lead in the middle of the opening period at the Gangneung Hockey Centre, with Nikolay Prokhorkin beating US goalie Ryan Zapolski. Prokhorkin then struck again to make it 2-0 for the Red Machine early in the second 20 minutes.

Former NHL star Ilya Kovalchuk dashed any American hopes for a comeback, netting his team’s third goal in the last second of the period. And it was Kovalchuk who settled the final 4-0 score less than 30 seconds into the third period.

The win allowed the Russian team to climb to first place in Group B of the tournament, and guarantees a spot in the playoffs. Oleg Znarok’s men have 6 points with one game remaining in the group stages, while Slovenia, the US, and Slovakia are all tied with 4 points.

The American side played rough on the night, and there were a lot of scuffles during the match. “There were moments when we tried to calm the guys down,” Russian coach Oleg Znarok said. “We didn’t fall for provocations. Our opponents were, probably, tasked with attacking our leaders when they hit [Pavel] Datsyuk and Kovalchuk.”

All eyes were on Saturday’s encounter on the South Korean ice due to the current tensions in Russian-American relations.Last October, Russian President Vladimir Putin said that Moscow was in possession of information that the US was pressuring the International Olympic Committee (IOC) through its sponsors to see Russia excluded from the Pyeongchang Games. “We aren’t simply guessing about this, we know about it,” Putin said.

The Americans were among the most vocal critics of Russia as soon as allegations of a state-sponsored doping program emerged. The US also currently harbors World Anti-Doping Agency (WADA) informant Grigory Rodchenkov, who is the key witness in the case against Russia.

Following several investigations by WADA and the IOC, a number of Russian athletes were disqualified and deprived of their medals. The “clean” athletes, who were allowed to take part in the 2018 Olympics as neutral competitors, are forbidden from displaying the Russian flag and other national symbols at the Olympics.