TEHRAN, February 25 -Campaigning has kicked off in Egypt's presidential election, with incumbent President Abdel Fattah el-Sisi expected to win easily after his real challengers were detained, prosecuted or intimidated out of the race. 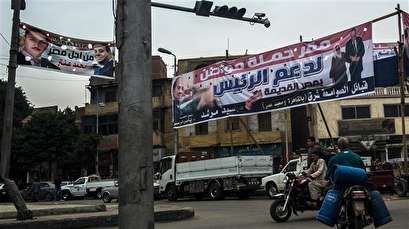 TEHRAN,Young Journalists Club (YJC) -Campaigning has kicked off in Egypt's presidential election, with incumbent President Abdel Fattah el-Sisi expected to win easily after his real challengers were detained, prosecuted or intimidated out of the race.

Sisi, who has been in power since he led the 2013 military overthrow of his predecessor, Egypt’s first democratically-elected president Mohamed Morsi, is one of the two candidates.

The other candidate is Moussa Mostafa Moussa, leader of the pro-government centrist Ghad (Tomorrow) Party that had collected signatures of support for Sisi’s presidential campaign.

Moussa formally filed his candidacy just minutes before the deadline, saving the upcoming election from descending into farce with Sisi as the sole candidate.

Campaigning began on Saturday, one day after the National Electoral Commission officially announced the names of the two presidential hopefuls.

The commission spokesperson Mahmoud al-Sherif said the body had not received any legal challenges against the two candidates or "any objections on their eligibility."

The commission also urged the media to be "objective" and banned government officials from "trying to influence the outcome of the election, positively or negatively."

Sixty million people are eligible cast their ballots in the presidential election.

Sisi's critics say he has silenced all forms of political opposition during his first four-year term.

His administration has been under fire for widespread arbitrary arrests, enforced disappearances, torture against perceived dissidents, and trial of thousands of civilians in military courts since the 2013 coup.

Several human rights groups have denounced the election as “farcical” and opposition leaders have called for a boycott.

A coalition of opposition figures said in a joint statement that Egyptians should stay away from the polls in protest as the government had prevented “any fair competition in the upcoming elections”.

“We call on our great people to boycott these elections entirely, and to not recognize anything that results from it,” read the statement.

Mousa has widely been accused of cooperating with Sisi's administration. However, he has denied the allegation, claiming, “We are not puppets in this race."

All genuine opposition candidates to Sisi have withdrawn from the election.

Among key figures arrested ahead of the polls were Abdel Moneim Abul Fotouh, a former leading member of the outlawed Muslim Brotherhood movement, and ex-army chief of staff Sami Anan.

Abul Fotouh was put on a terror list and accused of spreading false news that could harm Egypt’s interests.

Anan, seen as the most credible rival to Sisi, was also detained for allegedly announcing his candidacy while still a registered officer.