TEHRAN, March 8 -At least nine people, including women and children, have been killed in new Saudi-led airstrikes against civilian targets across Yemen. 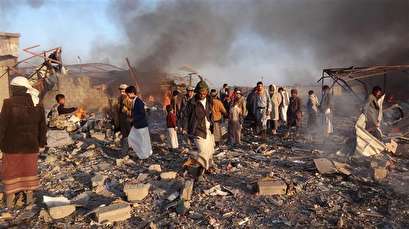 TEHRAN,Young Journalists Club (YJC)-At least nine people, including women and children, have been killed in new Saudi-led airstrikes against civilian targets across Yemen.

According to Yemen’s Arabic-language al-Masirah television network, a Saudi-led drone attack on a chicken run in the Jarrahi district of the western province of Hudaydah claimed the life of one Yemeni and inflicted injuries on another in the early hours of Thursday.

The report added that at least another Yemeni was killed and three others were wounded after a separate Saudi-led drone attack, launched shortly after the first one, targeted another chicken run in Zobaid district in the same province.

Separately, Saudi-led warplanes on Wednesday night pounded a residential area in the Shamlan district of the Yemeni capital, Sana’a, killing seven civilians — including two women and four children — and wounded four others.

Earlier on Wednesday, Saudi strikes had claimed the lives of a mother and her young daughter in the suburbs of the northwestern city of Sa’ada. Several other children of the same family were also injured in those strikes.

In another development on Wednesday, Yemeni army soldiers launched a retaliatory offensive against the al-Zab’ah military base in Saudi Arabia’s southern region of Najran, killing a number of Saudi forces and inflicting heavy damage on the base.

Since March 2015, the Saudi regime, together with a coalition of its allies, has been striking Yemen. It has been attempting unsuccessfully to reinstall Yemen’s former president Abd Rabbuh Mansur Hadi, who was a staunch ally of Riyadh until he resigned.

The Saudi campaign has killed at least 13,600 people since its onset. Furthermore, much of the country’s infrastructure, including hospitals, schools, and factories, has been reduced to rubble in the Saudi war.

Famine and outbreaks of cholera and diphtheria are other results of the Saudi-led war.

Besides defending Yemen against the Saudi aggression, the Houthi Ansarullah movement has also been running state affairs in Sana’a.