TEHRAN, March 9 - A suicide bomber blew himself up in the Afghan capital, Kabul, on Friday, killing at least seven people in an attack on a crowd gathered to commemorate a political leader from the mainly Shi’ite Hazara minority, officials said. 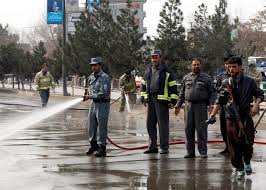 TEHRAN,Young Journalists Club (YJC) - One policeman and six civilians were killed and 15 civilians wounded when the bomber was stopped at a security checkpoint in the Mosalla-e Mazar area in Kabul, said Najib Danesh, an interior ministry spokesman.

However, the final confirmed toll may be higher. Shah Shir Azara, a security marshal at the site, said 13 people had been killed.

The bomber appeared to have intended to attack a crowd gathered for the anniversary celebrations of the death of Abdul Ali Mazari, a Hazara political leader killed by the Taliban in 1995, but he was stopped before reaching the main gathering.

Friday’s attack came less than two weeks after President Ashraf Ghani called on the Taliban to join peace talks to end more than 16 years of the latest phase of Afghan war.

However, there has been no let up in the violence that has been killing and wounding more than 10,000 civilians a year - and many more combatants - with fighting continuing across large parts of the country and Kabul itself hit repeatedly by attacks.

On Thursday night, Taliban fighters attacked a joint army and police outpost in the northern province of Takhar, killing seven soldiers and 10 policemen, according to Khalil Aseer, a provincial police spokesman.

The Taliban said in a statement that 29 soldiers and police were killed in the attack, including four commanders.