TEHRAN, March 9 - An unexpected announcement that a meeting is being planned between the leaders of long-time adversaries the United States and North Korea has been welcomed by regional powers China and Russia as well as South Korea. 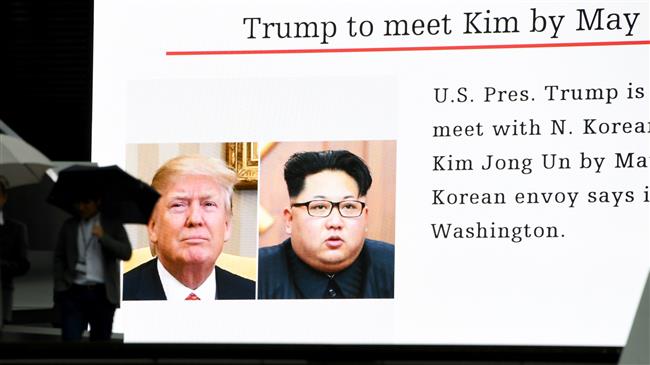 Chung, who had paid a visit to Pyongyang earlier this week, said he had passed on a message to Trump that Kim was “committed to demilitarization” and had “pledged that North Korea will refrain from any further nuclear or missile tests” if its security is guaranteed.

Speaking outside the White House on Thursday, he said Trump had expressed willingness to sit down with Kim “as soon as possible.”

“Kim pledged that North Korea will refrain from any further nuclear or missile tests,” Chung said. “He understands that the routine joint military exercises between the Republic of Korea and the United States must continue. And he expressed his eagerness to meet President Trump as soon as possible.”

The summit would be the first between a North Korean leader and a sitting US president. Trump and Kim have repeatedly traded insults and threats of military attacks that raised fears of war between Pyongyang and Washington in recent months.

China, North Korea’s main ally, said it welcomed the “positive signal” from both sides.
“We welcome this positive signal by the US and North Korea in having direct dialog,” Foreign Ministry spokesman Geng Shuang told a regular press briefing on Friday. He said that “the Korean Peninsula nuclear issue is moving in the right direction.”

Beijing has long been pushed for the US and North Korea to hold direct dialog.

Asked if China might host the meeting, the spokesman merely said Beijing’s “role in easing the tensions is indispensable.”

Russian Foreign Minister Sergei Lavrov also hailed the proposed meeting on Friday, saying, “We do hope that this meeting is going to take place.”

“Certainly, it is required to normalize the situation around the Korean Peninsula,” Lavrov was quoted by Russian state news agency Tass as saying on Friday.

South Korea’s Foreign Minister Kang Kyung-wha said Seoul is consulting with Washington on the planned summit between Trump and Kim.

Kang had said earlier on Friday that the South would make sure the summit takes place and that it becomes “a meaningful meeting with good outcome.”

A summit is also being planned between Kim and South Korea’s President Moon Jae-in in a Korean border village at the end of April.

Shortly after the announcement about the possible meeting — to be held by May — Japan’s Prime Minister Shinzo Abe also said he appreciated “North Korea’s change.”

Abe, however, attributed the diplomatic overture to the pressure of the sanctions on Pyongyang, saying, “We will continue imposing the utmost pressure until North Korea takes specific actions toward thorough, verifiable, and irreversible demilitarization.”

“Japan and the US have been and will be together 100 percent,” Abe said.

‘Trump will jump at anything that increases popularity’

Tokyo has maintained its call for “maximum pressure” on Pyongyang even after the easing of tensions that came with North Korea’s participation in the Winter Olympics in South Korea last month.

Signs of tensions subsiding between Washington and Pyongyang now seem to have concerned Tokyo. A former Japanese diplomat who declined to be identified told Reuters that Tokyo fears if Pyongyang “sits down with Washington, it will have absolutely no interest whatsoever in sitting down with Japan. That will make Abe’s position very difficult.”

“As for Washington, Trump is such an unpredictable guy. If anything will help elevate his approval domestically, he’ll jump [at it],” he said, hinting that Trump’s planned meeting with Kim may be premature.