TEHRAN, March 11 - Cubans go to the polls on Sunday in a one-party vote that marks the penultimate step in a political process that will culminate next month with the selection of the Communist-ruled island’s first non-Castro leader since the 1959 revolution. 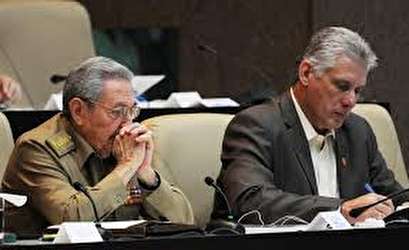 TEHRAN,Young Journalists Club (YJC) -Cubans go to the polls on Sunday in a one-party vote that marks the penultimate step in a political process that will culminate next month with the selection of the Communist-ruled island’s first non-Castro leader since the 1959 revolution.

The government depicts the vote, which takes place every five years and in which Cubans are asked to endorse two official lists of candidates for the national and provincial assemblies, as a symbolic show of unity.

This year, though, the newly-seated national assembly will on April 19 select a new president to replace Raul Castro, 86, who together with his late older brother Fidel Castro ruled the Caribbean island for nearly six decades.

While Castro is expected to remain at the helm of the powerful Communist Party, First Vice-President Miguel Diaz-Canel, 57, is expected to become president.

Given he will not have the same moral authority as the “historic generation” of revolutionary leaders, Diaz-Canel will have to earn his legitimacy by addressing voters’ concerns and raising living standards, analysts say.

That task will be more challenging at a time when aid from ally Venezuela is falling, relations with the United States - which maintains a decades-old embargo on Cuba - are worsening and there is pushback against market reforms.

“For many Cubans, elections have never represented change,” said Rafael Padron, 37, a sports trainer in Havana. “But this is a key moment.”

More than eight million Cubans will vote to ratify two official lists of candidates - one to form the 605-member National Assembly and another to constitute the 14 provincial assemblies totaling 1,265 delegates.

While candidates are not required to belong to the Communist Party, the only legal party in Cuba, most do.

The parliamentary candidates, selected by party-controlled commissions, include Raul Castro and two men who fought with him in the mountains during the revolution, vice-presidents Jose Ramon Machado Ventura, 87, and Ramiro Valdes, 85.

However, Castro has said he will step down as president at the end of his second five-year term in April. Many analysts expect his fellow revolutionaries also to retire from the government, marking a generational shift.

A ceremony last month in the neoclassical Capitol at which Castro awarded them medals for being “heroes of work” has been interpreted as a symbolic farewell.

“We don’t know what will happen exactly,” said Arnaldo Betancourt, 52, who sells handcrafts in Havana, “but people want to see new things: a change for the better.”

A VOTE WITHOUT ADVERSARIES

The electoral cycle began last year with the election of more than 12,515 ward delegates in the only vote in which ordinary Cubans get to choose between two or more candidates.

About 50 percent of candidates for the provincial and national assemblies must be ward delegates, to ensure they keep in touch with grassroots issues. The remainder are officials and personalities from the arts, sport and other sectors.

The candidate lists do not contain a single known opponent of Cuba’s one-party system, one of the last left in the world.

The government says the party allows adequate space for discussion and most dissidents are mercenaries funded by foreign governments and exiles, out to topple the government.

The number of candidates traditionally equals the number of positions available: the only choice being not to vote for a certain candidate, leave blank or spoil one’s ballot.

Election turnout in Cuba is nonetheless historically very high, with abstention frowned upon.

“Here people participate in the elections really to fulfill an obligation because if not you set yourself apart in front of the Committees in Defense of the Revolution,” said Rosario Vega, 38, referring to neighborhood block committees.

Other Cubans say they see the vote as an opportunity to show they support the system.

“The vote is for our homeland, for boosting the economy,” said Julio Cesar Garriga, 29, “but united with our fists clenched when imperialism tries to confuse us.”