TEHRAN, March 13 -The evacuation of three squats in Athens comes after a spate of far-right attacks on anarchist and left-wing spaces. 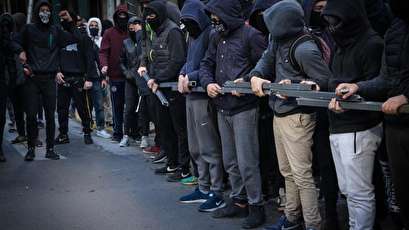 TEHRAN,Young Journalists Club (YJC) -The evacuation of three squats in Athens comes after a spate of far-right attacks on anarchist and left-wing spaces.

Police officers carried out the evacuations of Gare and Zaimi, a pair of squats in the Exarchia district of Athens, and another in Koukaki, another nearby neighbourhood, police told the ANA-MPA news agency.

Gare, which had been evacauted in November 2017, was reoccupied by anarchists in December.

A statement posted on the Athens IndyMedia, an anarchist-affiliated website, described the police operations as "repressive".

In Exarchia, the statement said, the police "threatened the neighbourhood" by evacuating the buildings.

The statement went on to condemn the raids as "a desperate attempt by the state and in particular the nationalist left" to crack down on the squats, referring to Syriza, the left-wing party that came to power in January 2015.

More than a dozen squats are situated in Athens, and to a lesser extent, in other cities in Greece. Many are occupied by anarchists, while others provide residence for refugees and migrants.

Several of the squats are located in Exarchia, an area where many anarchist and left-wing activists are based.

Nasim Lomani, an activist at the City Plaza squat in Athens, explained the squat movement "is under intense pressure from the state".

Established in 2016, City Plaza is a squat in a deserted hotel in the city centre and provides residence to more than 350 refugees and migrants.

City Plaza has been threatened with eviction in the past.

"We are in solidarity with all three of the squats," Lomani told Al Jazeera. "In general, the whole [squat] movement is under intense pressure from the state."

The raids come on the heel of growing far-right attacks on anarchist squats and left-wing social centres across the country.

Last week, police arrested seven members of the neo-fascist Combat 18 Hellas organisation, which is believed to be connected to more than 30 attacks on anarchist squats and Jewish memorials in Athens, Thessaloniki and elsewhere.

In late January, as hundreds of thousands of nationalist protesters rallied against negotiations between Athens and Skopje over a name dispute, a group of assailants set ablaze Libertatia, a squat in the northern coastal city of Thessaloniki.

One of those injured and hospitalised was a lawyer representing the family of Pavlos Fyssas, the anti-fascist rapper stabbed to death by a Golden Dawn member in September 2013.

The attackers reportedly chanted "blood, honour, Golden Dawn", a reference to the neo-fascist party that has 16 seats in the Greek parliament and is on trial for allegedly operating a criminal organisation.