US set for 'very violent' foreign policy under Pompeo

TEHRAN, March 14 - US President Donald Trump has fired Secretary of State Rex Tillerson after a series of public rifts over several issues including Iran, Russia and North Korea, replacing him with CIA Director and former congressman Mike Pompeo. 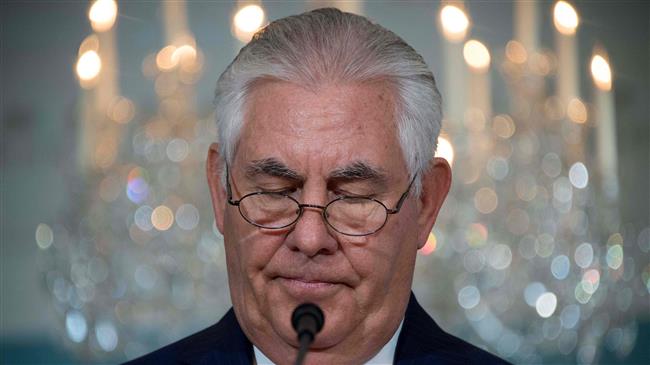 TEHRAN,Young Journalists Club (YJC) - Tillserson, 65, was the chief executive of ExxonMobil before he was appointed by Trump to head the US State Department. He had no diplomatic or political experience before becoming secretary of state.

Tillerson joined a long list of senior US officials who have either resigned or been fired since Trump took office in January 2017.

The resignations and firings of senior officials are raising concerns in Washington of a coming "brain drain" around the president that will only make it more difficult for Trump to advance his already languishing policy agenda.

Press TV has talked to political commentators Scott Bennett and Wilmer Leon to share their opinion on this issue.

Bennett believes the removal of Tillerson is going to be “terrible” for the foreign policy of the United States, adding that the country is going to have a “very reckless, violent” State Department under Pompeo’s control.

“The State Department requires a very erudite, soft-spoken, very wise presence, a very charismatic presence. You have to have the human magnetism and charisma to engage in effective diplomacy and State Department craft … but Mike Pompeo has absolutely no charisma, no honesty, no character,” he said.

Bennett further opined that Trump needs to “reeducate” himself on the exact limitations of his power; otherwise, he is going to destroy the reputation of the United States around the world.

He concluded by saying that the United States can very soon find itself in a stalemate of diplomacy and military operations if Trump continues the path of choosing “war hawks”.

Leon, the other panelist on the program, maintained that the firing of Tillerson is “irresponsible” and “ridiculous”, especially at a time when the United States is going to have a meeting with North Korea.

The selection of Pompeo, he said, validates the idea that the United States is moving closer to a war footing, arguing that the presence of such individuals in the White House is “very dangerous”.

Trump does not listen to anybody, Leon said, stressing that the primary reason for the sack was because Tillerson and the US president had different opinions over some of the administration's most crucial foreign policy challenges.

“Trump cannot be educated because he refuses to listen to people with more information and contrary positions. So if you do not tell him what he already perceives and believes to be correct, there is no space in the room, there is no air in the room for further dialogue,” he said.

Share to
Related News
‘Godmother of Torture’ Haspel should be in dock at The Hague, not head of CIA – John Kiriakou
White House backs UK decision to expel Russian diplomats over Skripal saga
Tags
Trump ، Tillerson ، dismissal ، Pompeo
Your Comment