US plans to remain in Syria ‘for a long time, if not forever’ – Lavrov

TEHRAN, March 14 - Officials in Washington are aiming to maintain a foothold in Syria for a long time, “if not forever,” using chemical weapons provocations to achieve this objective, Russian Foreign Minister Sergey Lavrov said. 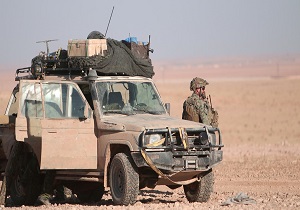 TEHRAN, Young Journalists Club (YJC) - There are no grounds “to doubt the willingness of some US officials to keep a foothold [in Syria] for a long time, if not forever, and contribute to the collapse of the Syrian Arab Republic,” Lavrov said at a news conference in Moscow on Wednesday.

“Various methods” are being used, including “information revealed via [Russia’s] Defense and Foreign Ministries, which says that other provocations involving chemical weapons are being prepared,” the foreign minister said, noting that one such “staging” might take place in Eastern Ghouta.

On March 5, Lavrov said Russia had evidence that the US involvement in Syria had nothing to do with combatting terrorism. Speaking during a visit to Namibia, the foreign minister asserted that Washington is willing to keep the Al-Nusra Front terrorist group as a “plan B” to change the leadership in Damascus, according to Interfax.

Some policymakers in the American capital, he said, are “harboring plans to disintegrate the Syrian state.”

In February, Lavrov told Euronews that “the US clearly has a strategy that, I think, consists of stationing its armed forces in Syria forever.”

The US pursues the same goal in Iraq and Afghanistan “despite all of its earlier promises.” The Americans are working “to cut a huge chunk of Syrian territory from the rest of the country” while setting up puppet local authorities in that area and “trying in every way to establish an autonomous entity under Kurdish authority,” Lavrov said.

US support for Kurdish militias operating in Syria contributed to damaging relations between Washington and Ankara. Turkey launched Operation Olive Branch earlier this year and entered Syria’s Kurdish enclave in Afrin with the stated goal to drive Kurdish “terrorists” and other militant groupings out of the area.

Speaking alongside Lavrov on Wednesday, Turkish Foreign Minister Mevlut Cavusoglu said Ankara backs Syria’s territorial integrity, although the operation is ongoing. “Our goal is not to seize or attempt to seize Syrian territory,” he said.