TEHRAN, March 14 - Philippines President Rodrigo Duterte intends to pull his country out of the International Criminal Court (ICC), shortly after the judicial body launched a crimes against humanity investigation into his controversial war on drugs. 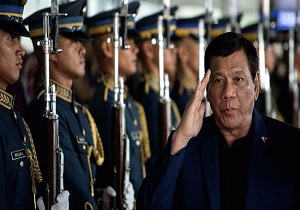 TEHRAN, Young Journalists Club (YJC) - In a lengthy statement released Wednesday, the Filipino strongman leader decried what he believed to be an "outrageous" attack on his character by United Nations (UN) officials. Duterte has been accused of facilitating extrajudicial killings and other rights abuses during a campaign to stamp out illegal drugs in the Asian country.

Last month, the ICC said it was investigating allegations the Philippines president had committed crimes against humanity.

Duterte initially welcomed the move, suggesting it would provide him with an opportunity to clear his name of any apparent wrongdoing. However, in a dramatic U-turn, he has since decided the judicial body has demonstrated a "brazen ignorance of the law." He also said the ICC was "useless" and "hypocritical."